Works by Daisaku Ikeda on Youth and Education Published in Brazil 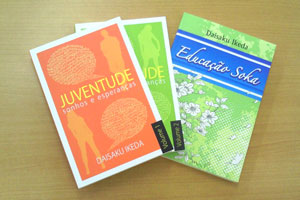 SÃO PAULO, Brazil: Publisher Brasil Seikyo has released Portuguese editions of two works by Daisaku Ikeda. The first, Soka Education: A Buddhist Vision for Teachers, Students and Parents, is a collection of Mr. Ikeda's addresses and proposals on the ultimate purpose of education and its transformative processes. The second, Discussions on Youth, is a collaborative effort between Mr. Ikeda and youth leaders of the Soka Gakkai in Japan, of which Mr. Ikeda is the honorary president.

Soka (value-creating) education holds the lifelong happiness of the learner as its highest goal. Mr. Ikeda is the founder of the Soka education system encompassing kindergarten to graduate study in Japan, schools in Hong Kong, Singapore, Malaysia and Brazil, and Soka University of America in the United States. Soka Education: A Buddhist Vision for Teachers, Students and Parents is also available in Danish, Italian and Sinhalese.

Discussions on Youth is a two-volume set which examines the myriad anxieties and harsh realities that universally confront young people and provides practical ways to overcome such issues. The discussions took place in Japan between 1996 and 1997 and between 1997 and 1999. Brasil Seikyo released the first volume in 2001 and followed it with the second volume in 2005. This 2011 Portuguese release offers both volumes as an omnibus edition. Discussions on Youth is also available in French, Spanish, Hangul and Chinese.

[Adapted from articles in the February 8 and 12, 2011, issues of the Seikyo Shimbun, Soka Gakkai, Japan]