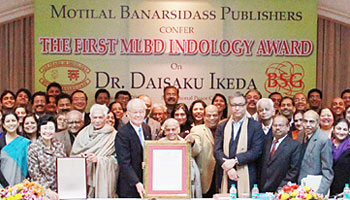 On January 15, 2011, renowned Indian publisher Motilal Banarsidass (MLBD), New Delhi, India, presented its first MLBD Indology Award to Daisaku Ikeda, SGI president. MLBD gave the award in recognition of Mr. Ikeda's contributions in the field of "Indic Research and Oriental Wisdom," and for "his outstanding achievements in the realm of Buddhism."

Since its modest beginnings in 1903 as a small bookstore in Delhi offering books on spirituality, MLBD has developed into one of the world's foremost publisher of scholarly works on Indology, Sanskrit and Buddhism, publishing over 5,000 books to date. The U.S. Library of Congress, the world's largest library, has recognized MLBD for its formidable catalog of priceless works in the field of Indian philosophy, such as the Sacred Books of the East, comprising 50 volumes and edited by Max Müller, and Ancient Indian Tradition And Mythology (68 Vols.): Mahapuranas, a translation of an encyclopedic account of the Jain tradition comprising 100 volumes.

In a keynote speech, Mr. Sircar lauded Mr. Ikeda for his contributions to peacebuilding through Indian thought and Buddhist philosophy founded on a careful study of the source of conflicts. He expressed his belief that peace can be built through the efforts of awakened individuals, such as the members of Bharat Soka Gakkai in India, who share Mr. Ikeda's values and ideals. In his address, MLBD Managing Director Jain said the recipient of the Indology award must be an outstanding scholar, and that Mr. Ikeda was conferred the award for "his unparalleled efforts in the sphere of Indology leading towards the establishment of lasting global peace."

In his acceptance speech, Mr. Ikeda expressed heartfelt gratitude for the award and referred to MLBD as "a momentous enterprise dedicated to transmitting the ancient wisdom of humanity to the present era, and . . . into the distant future." Drawing on the vision and worldviews of various Indian thinkers, from Gautama Buddha to the poet-sage Rabindranath Tagore and Ramakrishna Mission founder Swami Vivekananda, Mr. Ikeda lauded "the spirit of India" for elucidating "the ultimate unity of the inner cosmos of human life and the outer cosmos of the phenomenal world."

He then shared Tagore's famous insight that Gautama Buddha "revealed humanity's innate strength and sought to bring about blessings and happiness from within rather than seeking them in Heaven." In Mr. Ikeda's view, "the fertile spirituality of India offers proof of the great potentials hidden within the depths of human life."

Since his initial visit to India in 1961, Mr. Ikeda has met with many Indian thinkers, coauthoring dialogues with such eminent scholars as Dr. Karan Singh, president of the Indian Council for Cultural Relations (ICCR), M. S. Swaminathan, past president of the Pugwash Conferences on Science and World Affairs, and Dr. Lokesh Chandra, renowned scholar of Tibetan, Mongolian and Sino-Japanese Buddhism.

[Adapted from an article in the January 25, 2011, issue of the Seikyo Shimbun, Soka Gakkai, Japan]