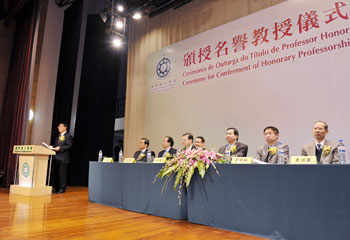 Macao Polytechnic Institute (MPI), located in Rua de Luis Gonzaga Gomes, Macau Special Administrative Region, recently presented Soka University founder Daisaku Ikeda with an honorary professorship in recognition of his longstanding contributions to Sino-Japanese friendship and to peace, culture and education on a global scale. The ceremony took place by proxy on January 29, 2011, at the auditorium on the MPI campus. SGI Vice President Hiromasa Ikeda received the certificate and a commemorative plaque from MPI President Lei Heong Iok on behalf of his father. Also present at the ceremony were the following Macau officials: Secretary for Social Affairs and Culture Cheong U; Vice Director-General Li Zhengqiao of the Department of Culture and Education; Director-General Zhang Wuzhuan of the Department of Policy Research at the Ministry of Foreign Affairs, Office of the Commissioner; and Secretary-General Lei Pui Lam of the Education Association.

MPI aims to provide student-centered education and training with a focus on personal discovery, academic freedom, integrity and creativity, while supporting diverse research and instilling students with a spirit of service for the betterment of society. It has academic exchanges with some 50 institutes of higher learning in the UK, USA, Australia, Portugal, Taiwan, Hong Kong and mainland China.

In the citation, MPI President Lei referred to a speech titled "A New Global Awareness" delivered by Mr. Ikeda at the University of East Asia in Macau in 1991. In it, Mr. Ikeda had lauded Macau "for the example it provides of cultural coexistence and for the precedent it sets as we seek harmony among all peoples." Mr. Ikeda had also underscored the five cardinal virtues of Confucian thought--benevolence, justice, propriety, wisdom and sincerity--and examined longstanding Chinese perspectives on the role and responsibility of individuals in bettering society as well as the conditions of human existence. These perspectives, Mr. Ikeda had observed, were in marked contrast to the western conceptualizations of self based on the Cartesian model of the autonomous, introspective individual, which are "almost devoid of reference to an 'other.'" Referring to the concept of "harmony in diversity" from the Analects of Confucius that has been at the root of Macau's some 400-year history and to Mr. Ikeda's analyses of the five cardinal virtues from a Buddhist view, Professor Lei stated his desire for Macau and Japan to write a fresh chapter in the annals of their cultural exchange with mutual deference for these two rivers of thought.

In an acceptance message read by proxy, Mr. Ikeda expressed his deep appreciation and said he shared credit for the citation with his fellow members of SGI-Macau, who have dedicated themselves in service to Macau society. He concluded by saying he had the greatest expectations for the Macao Polytechnic Institute, which has assimilated ideals of both the East and the West, to spearhead the effort to foster capable, pragmatic global citizens.

[Adapted from an article in the February 2, 2011, issue of the Seikyo Shimbun, Soka Gakkai, Japan]