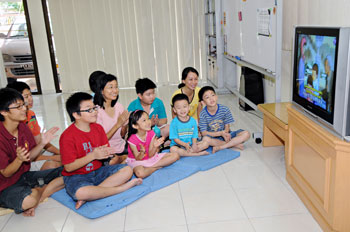 The New Straits Times, Malaysia's largest English daily, featured an interview with Daisaku Ikeda in its December 25, 2010, issue. The interview was based on animated adaptations of Mr. Ikeda's children's stories, which were aired in Malaysia every Saturday from November 13 to December 25, 2010, coinciding with the school holidays.

Five stories were aired on ntv7, a Malaysian TV station, as part of a series titled "Like Me, Like You: The World in Your Heart." The Snow Country Prince, The Two Princes, The Princess and the Moon, The Prince and the White Horse and The Flower and the Phoenix--dubbed in Chinese and subtitled in Malay--were broadcast in Malaysia for a second time.

The animations were favorably received by the young viewers. One nine-year-old boy commented, "I was impressed by all the stories. From The Two Princes, I learned the spirit of watching out and caring for each other." An eleven-year-old girl said, "The Princess and the Moon taught me that each one of us has both strengths and shortcomings and I learned that I don't have to mope about my shortcomings."

In the interview, Mr. Ikeda explained what motivated him to write stories for young people: "Children's stories epitomize peace. War, on the other hand, deprives children of their dreams and slams the door on their future. Stories can help them expand their dreams and hopes." He referred to his encounter with Josei Toda, the second Soka Gakkai president, whom he looked upon as his mentor, which helped him reaffirm his values and how his own childhood experience during the war strengthened his desire for creating peace and happiness in the world.

"All children possess innate dignity, rich creativity and vitality," noted Mr. Ikeda. "I think that children have the inborn ability to find hope in the most hopeless environment. In fact, they are hope itself."

Mr. Ikeda said that the stories, conveying such core values as friendship, courage, compassion and tolerance, are based on real-life events upon which children could relate. Originally produced in Japanese by Shinano Art & Culture Consultants, these animations have been dubbed in 11 languages and aired in 25 countries and regions including Singapore, Iceland, Panama, Spain, Hong Kong, India and Australia.

[Adapted from various reports and articles.]