Chungju National University (CNU) in South Korea presented an honorary doctorate of business education to Daisaku Ikeda, Soka University founder and SGI president. The Korean institution also presented an honorary professorship to his wife, Kaneko, on the occasion. The two were recognized for their longstanding contributions to Korea-Japan relations, as well as their service to peace and education worldwide. The conferral ceremony took place by proxy at Soka University in Hachioji, Tokyo, on July 12, 2011, with Soka University President Hideo Yamamoto accepting both citations and a commemorative plaque on their behalf.

Established in Chungbuk Province in 1962 as an engineering college, CNU today has an enrollment of 9,000 students with seven undergraduate departments and graduate programs in the humanities and natural sciences. Having been recognized for its educational excellence by Korea's Ministry of Education, Science and Technology for the past four consecutive years, CNU is also engaged in exchange initiatives with institutes in China and India.

In his conferral speech, President Jang paid tribute to Mr. Ikeda's courage, resolve and commitment to justice and dialogue in advancing global peace and the well-being of ordinary citizens. He then lauded the educational principles of Tsunesaburo Makiguchi (1871-1944), the father of value-creating pedagogy, who believed in the centrality of the happiness of the learner, a conviction the CNU president also shares. One result of this belief, he said, is an initiative launched at CNU in 2010 in which the faculty participated in a training program for teaching innovation and competence-building as a first step toward transforming their university into one very much focused on the student. Their aim is to help students cultivate their creative potential so they are able to contribute to the betterment of society upon graduation.

In a message, Mr. Ikeda expressed deep gratitude to CNU for the academic honors presented to his wife as well as to himself, and said he would like to share the honor with his fellow SGI members in Korea. He noted that in a world gripped by fear and uncertainty, human-centered education must foster in youth an unshakable foundation of integrity and insight. Education, he said, is essential to social progress, young people are essential to building a better future and universities are essential to advancing globalization in the twenty-first century. A university that strengthens itself today, he concluded, is sure to transform this age of crises into an age of opportunity and growth. 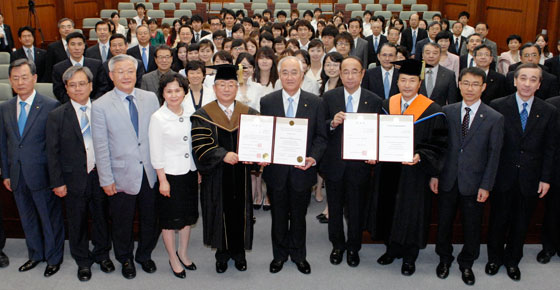 [Adapted from an article in the July 13, 2011, issue of the Seikyo Shimbun, Soka Gakkai, Japan]