PSU recognized Mr. Ikeda for his "advocacy for peace" and for founding schools that serve as "dynamic and meaningful training centers for global citizenship," while Mrs. Ikeda was honored as "a global citizen worthy of emulation . . . in the service of humanity."

First founded in the 1922 in the province of Pangasinan and formally adopting its present name in 1979, PSU provides advanced instruction in the arts, sciences and various technical and professional fields. With a main campus in Lingayen, along with eight other campuses throughout the province, PSU has a student enrollment of some 16,000 undergraduates and 1,000 postgraduates. PSU's teacher education program has earned special government recognition for its excellence, while another initiative, Open University Systems, provides higher education opportunities to working men and women.

In his message, Mr. Ikeda expressed deep gratitude to PSU for the academic honors presented to both his wife and himself, as well as to the people of the Philippines for their thoughts and support during Japan's "darkest hours" following the March 11 earthquake and tsunami. He states that the light needed to dispel this darkness can only come from young people and that education is "the means to amplify the youthful power of creativity and . . . focus and unleash this power for the sake of peace and prosperity for all." 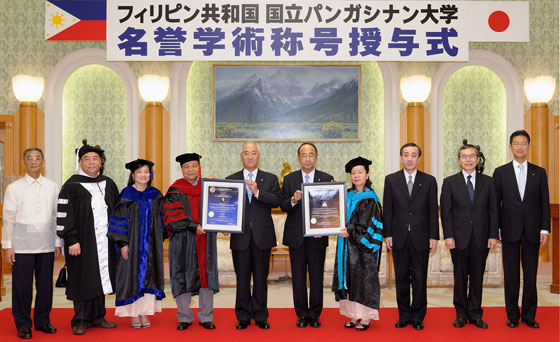 [Adapted from an article in the July 30, 2011, issue of the Seikyo Shimbun, Soka Gakkai, Japan]