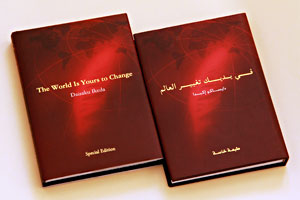 DOHA, Qatar: On June 11, 2011, SGI-Gulf, a Dubai-based cultural and educational organization, organized a book launch for an Arabic-English edition of The World Is Yours to Change. The work is a collection of thematic essays by Daisaku Ikeda in which he depicts attitudes and behaviors that will help pave the path to peace in the twenty-first century. In doing so he draws on the lives of individuals, such as Mahatma Gandhi and Torao Kawasaki, whose strength of character and ability to persevere led to extraordinary achievements and the advancement of peace.

In his speech, Dr. Ghanem introduced Mr. Ikeda's conviction that each individual, through one's own inner-directed positive change, is able to contribute to the transformation of society and the creation of lasting peace. Stating that a social reformation founded on nonviolent principles is the means for creating an ideal society, Dr. Ghanem recommended that The World Is Yours to Change be read by a wide Arab audience.

The event was reported by two major newspapers, the Gulf Times and the Peninsula.

[Adapted from an article in the July 3, 2011, issue of the Seikyo Shimbun, Soka Gakkai, Japan]