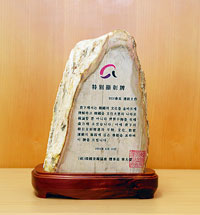 The plaque presented to Mr. Ikeda from the Korean Fine Arts Association

On June 12, 2011, the Korean Fine Arts Association (KFAA) honored Daisaku Ikeda, SGI president, and his wife, Kaneko Ikeda, for their longstanding dedication to peace and contributions to cultural exchange between Korea and Japan. The ceremony took place at the main auditorium at the SGI-Korea headquarters in Seoul, Korea, with the attendance of some 3,000 SGI-Korea (KSGI) members.

The citation on the plaque for Mr. Ikeda reads in part: "With deepest respect for your dedication to strengthening friendship between Japan and Korea and your journey to advance peace, culture and education." Mrs. Ikeda was commended for her noble ideals and efforts to help build the foundation for a peaceful and happy society and serving as an exemplar for women of the modern era.

Mr. Cha stated his belief that individuals who love and appreciate art have the ability to embrace all people with an egalitarian spirit transcending national boundaries and differences in ideology and beliefs, and that Mr. Ikeda is one such individual who has, for over half a century, cultivated a network of friendship around the world with the power of culture.

Established in 1961 and based in Seoul, KFAA, with a membership of over 26,000, is the largest association of its kind in Korea comprising painters, sculptors, designers and other fine artists. For half a century, the association has been advocating artists' rights and interests, and promoting international exchange of fine arts. 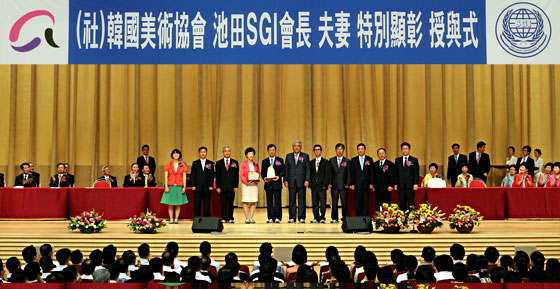 A ceremony took place by proxy on June 12, 2011 at the SGI-Korea headquarters.

[Adapted from an article in the June 22, 2011, issue of the Seikyo Shimbun, Soka Gakkai, Japan]