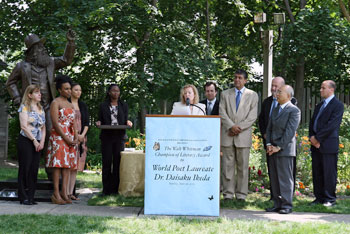 On June 26, 2011, the Walt Whitman Birthplace Association (WWBA) presented Daisaku Ikeda with The Walt Whitman Champion of Literacy Award for his contributions to the language of peace and understanding. "[Mr. Ikeda's] use of writing and poetry as vehicles to bridge knowledge-gaps echo the techniques used by Walt Whitman, our original champion of literacy," said WWBA President Tom Wysmuller.

The award, as well as a gold-leaf edition of Whitman's Leaves of Grass, was accepted by SGI-USA General Director Daniel Nagashima on Mr. Ikeda's behalf. Some 400 people attended the presentation ceremony, which was held at Whitman's birthplace in the town of Huntington, New York, USA. U.S. Senators Charles E. Schumer and Kirsten E. Gillibrand sent congratulatory messages to the event.

An avid admirer of the great American poet's work since his youth, Mr. Ikeda visited Whitman's birthplace in 1981 and dedicated an epic poem titled "Like the Sun Rising" on March 26, 1992, to commemorate the centennial anniversary of his passing. It reads in part:

In a message of appreciation sent to the WWBA presentation, Mr. Ikeda recalls his "dramatic encounter" with Leaves of Grass as a young man and through it, his "discovery of the true essence of humanity." He further writes: "What is the purpose of literature? [Whitman] shared his unchanging conviction with one of his most respected and beloved disciples: 'Literature is big only in one way—when used as an aid in the growth of the humanities—a furthering of the cause of the masses—a means whereby men may be revealed to each other as brothers.'"

The WWBA was established in 1949 to refurbish the deteriorating Whitman Birthplace and to preserve it for future generations. While the site was sold to the state of New York in 1957, the Association continues to preserve the Birthplace to sustain the legacy of the poet. The WWBA also undertakes literary and artistic initiatives, as well as conducts educational programs.