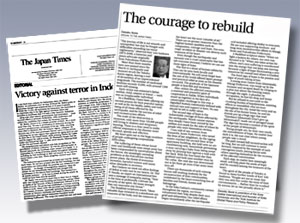 The Japan Times carries "The Courage to Rebuild," an essay by Daisaku Ikeda

The Japan Times, one of Japan's largest English language dailies, carried an essay by Daisaku Ikeda titled "The Courage to Rebuild" in its June 28, 2011, issue. In it, Daisaku Ikeda describes with admiration the resilience and fortitude of the people who survived the catastrophic earthquake and tsunami that struck the Tohoku-Kanto region on March 11, 2011.

While voicing concern over the need for faster and more focused official responses to aid evacuees, combatting the radioactive fallout from the damaged nuclear power plant in Fukushima and addressing the threat of economic recession, Mr. Ikeda highlights three signs of hope: a sense of human solidarity both locally and internationally; the indomitable courage of those affected by the disaster; and the passion and vigor of youth taking action in response.

Referring to a passage from Nichiren, the 13th-century Japanese Buddhist teacher, who wrote that "the treasures of the heart are the most valuable of all," Mr. Ikeda noted: "The path toward full reconstruction will be long . . . Each step, no matter how seemingly small, will help plant the seeds of hope and be counted among the treasures of the heart."

[Link to the essay "The Courage to Rebuild"]