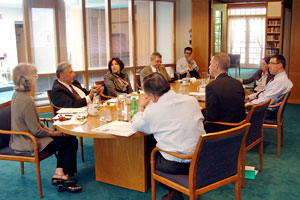 On June 3, 2011, the Ikeda Center for Peace, Learning, and Dialogue, located in Cambridge, Massachusetts, USA, hosted an education seminar commemorating the 15th anniversary of Daisaku Ikeda's 1996 Teachers College lecture, "Thoughts on Education for Global Citizenship." Among the themes explored during the three-hour discussion among five guest scholars were the subjective, values-oriented aspects of teaching, learning and leadership that Mr. Ikeda identifies as critical to global citizenship, but which are often disassociated in the test- and data-driven world of public education.

Ikeda Center Events Manager Kevin Maher launched the discussion by introducing two central themes of the Teachers College lecture: wisdom, courage and compassion as essential elements for global citizenship and, as Mr. Ikeda asserted, that "education should be a vehicle to develop in one's character the noble spirit to enhance and augment the lives of others." In order to inspire such development, Mr. Maher noted that "interactions between students and teachers are of the greatest importance."

Dr. Butin observed that of the three elements, courage may be the most relevant to today's public school teachers because school activities are increasingly regulated by outside agencies. In order not to "fall into despondency" in the face of institutional pressures, Director Joffee referred to Mr. Ikeda's faith in the power of a single individual to positively affect students.

Given "the daily grind" of schools, Director Lerner suggested that sometimes it is best to engage in the deeper dimensions of education in offsite retreat settings. In her experience, getting teachers to reflect on their original motives in becoming educators has yielded considerable dividends. Similarly, Dr. Gould stressed that school leaders should always be asking themselves what the aims and purposes of education are and to what degree their teaching and curriculum have been compatible with those aims.

Dr. Kress said she would be leaving the seminar with "visions of possibility" and concrete "next steps" for her own teaching at the University of Massachusetts. Others agreed that they would be returning to their respective programs and workplaces with a stronger commitment to dialogue, which Dr. Gould noted at the seminar's outset as "an end in itself," as an essential component of personal and organizational success.

Among the Ikeda Center staff participating in the seminar were Richard Yoshimachi, president and executive director, and Senior Research Fellow Virginia Benson.

Mr. Ikeda founded the institute (formerly named the Boston Research Center for the 21st Century) in 1993.

[Adapted from a June 2011 article by Mitch Bogen featured on the Ikeda Center for Peace, Learning, and Dialogue website]