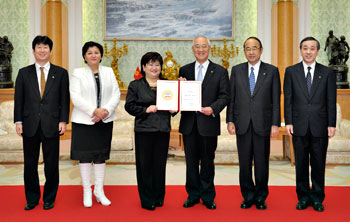 On March 2, 2011, the Kyrgyz-Russian Academy of Education presented an honorary professorship to Daisaku Ikeda, Soka University founder and SGI president, for his dedication to world peace and his manifold contributions to the advancement of culture, education and the arts. The conferral ceremony took place by proxy at the Soka University Central Tower in Hachioji, Tokyo. Academy Rector Chinara A. Shakeeva presented the certificate of appointment and a commemorative medal to Soka University President Hideo Yamamoto, who accepted it on behalf of Mr. Ikeda. Vice Rector Dinara B. Naralieva and Rector's aide Hironobu Ito were also part of the Kyrgyz delegation.

Kyrgyz-Russian Academy of Education trains educators based on the best combined educational systems of Kyrgyz and Russia. Specializing in the fields of business, psychology, education, law and languages, the academy not only attracts students from Kyrgyz, but also from the neighboring countries of Russia, Kazakhstan and Uzbekistan. The academy was established in 1997 following the collapse of the Soviet Union in 1991. It assimilated the financially-strapped Kyrgyz Science Academy, hiring its researchers as faculty staff and utilizing its facilities as part of the new educational institute, as well as receiving textbooks from Russia.

In her citation, Rector Chinara referred to Ode to the Grand Spirit, a dialogue between Mr. Ikeda and renowned Kyrgyz writer Chingiz Aitmatov (1928-2008), who was instrumental in the establishment of the Kyrgyz-Russian Academy of Education. She stated that the favorable public reception of the work, which delves into the ageless issues of truth, happiness, death and divinity, drew their attention to Mr. Ikeda's activities. She herself, the rector said, had been impressed by his accomplishments as a philosopher, peace advocate and founder of various institutions.

In his acceptance speech read by President Yamamoto, Mr. Ikeda expressed joy and gratitude for the academic honor. He wrote that no one would be happier about the presentation than Mr. Aitmatov, his close friend and spiritual companion, who experienced, as he had, the horrors of war during his youth.

Among the many significant themes they explored and agreed upon in Ode to the Grand Spirit was "the faculty of motherhood in prevailing over the demonic nature of power," noted Mr. Ikeda. Women, he concluded, must serve as the spiritual basis of society as much for their capacity to bear and nurture life as for their wisdom to seek peace.

[Adapted from an article in the March 3, 2011, issue of the Seikyo Shimbun, Soka Gakkai, Japan]