The Chinese university had its beginnings in 1949 as an institution for grooming teachers who would contribute to the advancement of society through education. A merger with a another academy in 1999 led to the establishment in 2007 of the present Hainan Normal University, which has four campuses. It has since been a major center for teacher education: of all the Hainan elementary and junior high schools, some 80 percent of the teachers and 90 percent of school principals are Hainan Normal University alumni. The university also trains many Chinese language teachers from Hong Kong and Macau.

In his conferral speech, President Han conveyed his condolences to the victims of the March 11 disaster and lauded the Soka Gakkai's emergency relief activities, including opening its facilities as emergency shelters for some 5,000 who lost their homes. He stated that Mr. Ikeda, who is an old friend of China, has had profound influence on the world and its development through his philosophy and activities. Referring to Mr. Ikeda's longtime efforts to advance education and foster young people, Professor Han stated that the Soka founder's educational philosophy finds consonance with that of Hainan Normal University and that is why he has been appointed an honorary professor.

In his message, Mr. Ikeda stated that he humbly accepted the honor on behalf of all the Soka University and Soka Women's College staff and students. The Soka University founder concurred with literary great Qiu Jun (c1420-1495) of the Ming Dynasty, a native of Hainan, who held that fostering capable individuals was a requisite for nation-building. Mr. Ikeda also extolled the outreach initiatives of Hainan Normal University faculty and students, who spend weekends among remote ethnic minority villages and regions doing volunteer work. 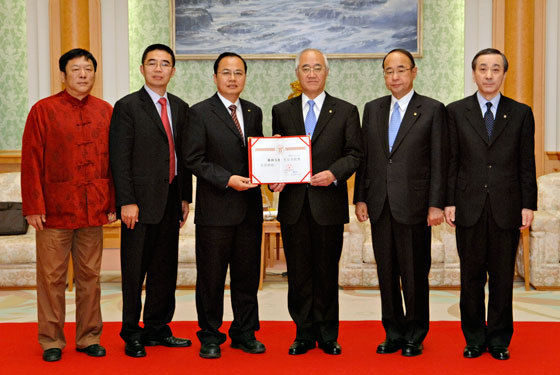 [Adapted from an article in the May 27, 2011, issue of the Seikyo Shimbun, Soka Gakkai, Japan]