Russian Edition of Daisaku Ikeda's Selected Works to be Published 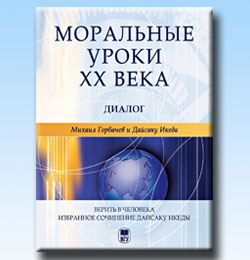 The design for the planned Russian edition of Moral Lessons of the Twentieth Century, a dialogue between Mr. Gorbachev and Mr. Ikeda

Moscow State University (MSU) Press recently announced that it will be publishing a Russian edition of Ikeda Daisaku senshu (tentative translation: The Selected Works of Daisaku Ikeda), a comprehensive collection of the author's works in Japanese.

The first work MSU Press plans to release is Moral Lessons of the Twentieth Century, a dialogue with former Soviet President Mikhail Gorbachev, who is also an MSU alumnus. This will be followed by the publication of Mr. Ikeda's dialogue with Russian cosmonaut Alexander Serebrov and Ode to the Grand Spirit, a dialogue with the Kyrgyz writer Chingiz Aitmatov.

MSU Press was established on May 8, 1756, and stands among the most prestigious publishers of literary and academic works in Russia. "I had been hoping to introduce Dr. Daisaku Ikeda's worthy insights not only to MSU, but throughout Russia's intellectual community for some time," noted Director Matveeva Alla Nikolaevna of MSU Press. "That opportunity has arrived and I am delighted."

The Japanese edition of Daisaku Ikedas's complete works not only features essays, university lectures, articles and dialogues, but also poetry, treatises on Buddhist philosophy and proposals for the advancement of peace, education and environmental protection. It is expected to reach 150 volumes and, as of November 2010, 122 volumes have already been released.

[Adapted from an article in the May 8, 2011, issue of the Seikyo Shimbun, Soka Gakkai, Japan]