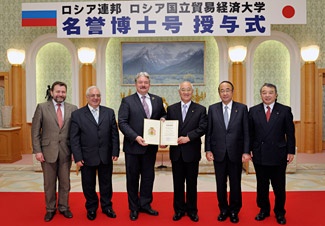 Originally founded in 1804 as a commercial school, RSUTE was recognized as an institution of higher education in 1993. Since then, student enrollment at RSUTE has rapidly grown to 83,000 at its 27 campuses throughout Russia. It has 231 departments under nine faculties ranging from law, business administration, commerce, marketing, finance and economics. The institution is also part of an educational consortium among universities specializing in advertising and commerce, and engages in academic exchanges and collaborations with 30 foreign universities.

In his citation, Rector Baburin noted that a recipient of the honorary doctorate from RSUTE must not only excel in a particular field but, "must also be an individual whom we hold in the highest regard and deem to be a role model for Russian youth." Mr. Ikeda, he explained, was recognized for his contributions to the development of philosophy, for establishing ideals grounded in humanism and compassion, and for his achievements in the field of education. Rector Baburin also said Mr. Ikeda's literary works serve as a moral compass for the world and as restorative nourishment for human contemplation.

In an acceptance message read by Board of Trustee Chair Yasunori Tashiro, Mr. Ikeda expressed his heartfelt appreciation to the Russian university for the academic honor and profound gratitude to the people of Russia for immediately dispatching a large rescue-and-relief contingent to Japan following the March 11 earthquake and tsunami. Mr. Ikeda commended Rector Baburin for his leadership in fostering capable youth and expanding educational opportunities for students. He concurred with the rector, noting that the trials experienced when rebuilding a nation can be seen as an "age of great hope" not only for her citizens, but for all humanity. The restoration of culture and spirituality, noted Mr. Ikeda, would enable the economy to also flourish.

[Adapted from an article in the November 19, 2011, issue of the Seikyo Shimbun, Soka Gakkai, Japan]