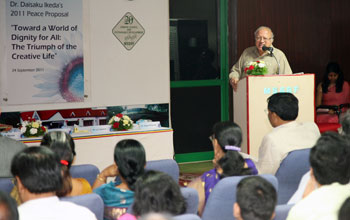 Dr. M. S. Swaminathan, known as the "Father of the Green Revolution," addresses the audience at the seminar in Chennai

Bharat Soka Gakkai (BSG), the Indian chapter of Soka Gakkai International, co-organized seminars on Daisaku Ikeda's 2011 Peace Proposal, "Toward a World of Dignity for All: The Triumph of the Creative Life." One was held in the city of Chennai on September 24, 2011, and another in Mumbai on November 5, 2011.

In his proposal, which he has issued annually since 1983, Mr. Ikeda urges the United Nations to reinforce collaborative ties with civil society in general and nongovernmental organizations in particular, while calling for the need to establish structures to reduce and ultimately abolish nuclear weapons. He also underscores the value of interfaith dialogue and the transformative capacity of young people to effect social reforms.

For the Chennai event, BSG collaborated with the M.S. Swaminathan Research Foundation, the non-profit NGO trust which aims to increase employment for impoverished women in rural India established and chaired by the renowned agricultural scientist, Dr. Monkombu S, Swaminathan, in 1988. Dr. Swaminathan, 86, not only agreed to preside over the seminar, his foundation also allowed use of its auditorium as the venue. The famed scientist spoke on his association with Mr. Ikeda in their common aspiration to abolish nuclear weapons and how their discussions shaped many deliberations of the Pugwash Conferences on Science and World Affairs, which was awarded the 1995 Nobel Peace Prize and which Dr. Swaminathan chaired in 2002. 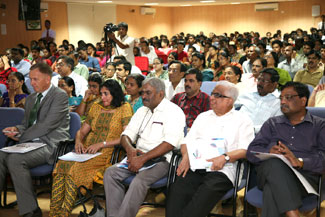 Consul General Listopadov related that his first encounter with Mr. Ikeda was in 1974, while studying at Moscow State University when the Buddhist leader visited the institution at the height of the Cold War. The consul general cited Mr. Ikeda for his efforts to defuse East-West tensions at the time.

More than 330 people, including members of the media, government, industry and academia, attended the seminar in Chennai, which was also reported in The Hindu, The Indian Express and News Today.

Held eleven days later, the seminar in Mumbai was co-organized by the Tata Institute of Social Sciences (TISS), the prestigious institution established in 1936 to promote "sustainable, equitable and participatory development, social welfare and social justice" through academic excellence. It was held at the TISS Convention Centre, drawing an audience of some 400 people. 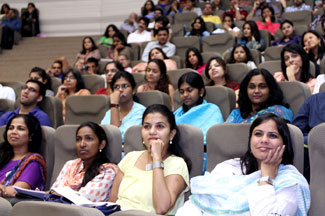 The speakers at the seminar were: Gerson da Cunha, a popular advertising and media personality; TISS Registrar Dr. Neela Dabeer; Venkat Chary representing the Jamnalal Bajaj Foundation; Abha Singh, social activist and writer as well as director of postal services in Bihar and Uttar Pradesh; and Rajni Bakshi, an author and journalist based in Mumbai.

Mr. da Cunha, who has worked extensively with UNICEF in New York and Latin America, underscored the importance of action in advancing peace and social transformation. "What we need is the fifth estate" consisting of ordinary people, he said. "The fifth estate must do what the first, second, third and fourth are unable to do."

Mr. Chary and Ms. Bakshi were among the speakers who agreed that organizations of self-motivated individuals such as the SGI and BSG can play an important social role for the "hope" they inspire in people. Mrs. Singh pointed out women were particularly vital in the task of creating a peaceful society. 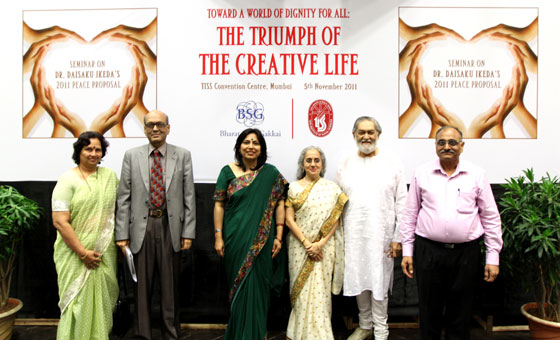 [Adapted from reports contributed by Bharat Soka Gakkai, as well as respective articles in the September 29 and November 12, 2011, issues of the Seikyo Shimbun, Soka Gakkai, Japan]