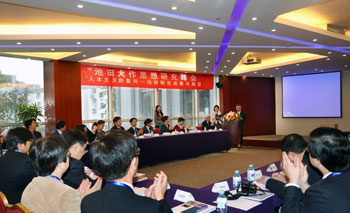 On November 4-5, 2011, researchers and students gathered in Beijing, China, to take part in a forum titled "The Renaissance of Humanism: Legacy and Future Vision of the Study of Daisaku Ikeda's Ideals." The event brought together some 30 representatives from 25 Chinese universities. Since 2005, symposia on SGI President Daisaku Ikeda's ideals have been held every year in China; this year's symposium served as a forum for reviewing and reflecting on past research as well as discussing future objectives.

In his speech during the opening ceremony, Professor Mingyuan Gi, dean emeritus of Beijing Normal University's College of Educational Administration and president of the Chinese Society of Education (CSE), described Mr. Ikeda's ideals as being centered on his profound compassion for humanity and peace and his dedication to fostering youth. Later, separate sessions were held to discuss Mr. Ikeda's ideals from various aspects: "Humanism," "Education," "Culture," and "Peace." One participant was of the opinion that the present focus on the study of Mr. Ikeda's thoughts and ideals should be expanded to understanding the motivation behind his actions and how his philosophy has been put into practice.

In his message to the summit, Mr. Ikeda stated that humanism is the positive impulse that awakens people to their innate, spiritual strength, and that this "spiritual strength" is the motivating force that will lead humankind from an age of self-centered materialism toward mutual happiness and peace. He also emphasized that the restoration of humanism essentially lies in each individual developing his or her life state from a "lesser self" to a "greater self." Moreover, when these "greater selves" come together in harmonious accord, it will lead to the revitalization of humanity toward global amity and partnership.

Lastly, referring to next year marking the 40th anniversary of the normalization of Sino-Japanese relations, Mr. Ikeda called upon participants to work together to widen the current of humanism into a global force through awakening and empowering people, especially the youth.

[Adapted from an article in the November 9, 2011, issue of the Seikyo Shimbun, Soka Gakkai, Japan]