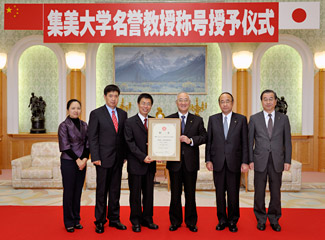 Jimei University, located in Xiamen, Fujian Province, China, presented Daisaku Ikeda, Soka University founder and SGI president, with an honorary professorship for his contributions to Sino-Japanese friendship, world peace and advancing education. On November 9, 2011, a delegation from Jimei University led by President Su Wenjin participated in the conferral ceremony at Soka University in Hachioji, Tokyo. Soka University President Hideo Yamamoto received the award on behalf of founder Ikeda. Together with a message to mark the occasion, Mr. Ikeda composed a poem in Chinese characters.

Jimei University's origins can be traced back to Jimei Normal School, founded in 1918. In 1994, five independent institutes and colleges in the area combined to form Jimei University. Today, over 25,000 full-time students are enrolled in its 20 colleges and departments, some of which are navigation, bioengineering, literature and the arts.

Professor Su commended Mr. Ikeda for his ongoing dialogues for creating a world of lasting peace and realizing people's happiness, grounded in his conviction in the sanctity of life. Mr. Ikeda's ideals, he observed, are redolent with profound meaning and his words are deeply influential.

In his acceptance message, Mr. Ikeda noted that Jimei University founder Chen Jiageng, born in 1874, was a contemporary of Soka education founder and first Soka Gakkai President Tsunesaburo Makiguchi, who was born three years earlier in 1871. Mr. Ikeda observed that Professor Chen had dedicated his life to establishing schools that came to be known as "Jimei Schools Village," in his beloved hometown and country, holding fast to his belief that "education leads to the flourishing of the nation, and therefore its development is the mission and calling of the people." Following the destruction of the Jimei Schools Village by the Japanese Imperial Army in the late 1930s, Professor Chen, together with his protogé Chen Cunmu, relocated the schools to remote provinces and continued to educate students, keeping alive the motto he created for the schools--"Sincerity and Perseverance." Mr. Ikeda said it was the continuation of this spiritual legacy of teacher and student, an ongoing inheritance and succession, which ultimately led to the establishment of today's Jimei University. He ended his message by saying that as a proud member of Jimei University and for the sake of Sino-Japanese friendship, he vowed to foster capable individuals who will spread their wings and fly into the world.

[Adapted from an article in the November 10, 2011, issue of the Seikyo Shimbun, Soka Gakkai, Japan]