Ikeda Center Hosts Seminar on Buddhist Concept of "Greater Self" 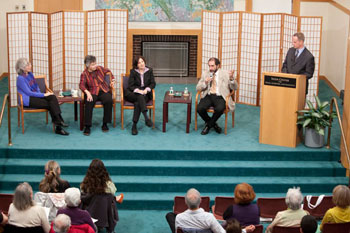 The Buddhist concept of "the greater self" was the topic of the 8th Annual Ikeda Forum on Intercultural Dialogue at the Ikeda Center in Cambridge, Massachusetts

On October 22, 2011, the Ikeda Center for Peace, Learning, and Dialogue, located in Cambridge, Massachusetts, USA, hosted its 8th Annual Ikeda Forum on Intercultural Dialogue, culminating a yearlong investigation into the meaning and value of the Buddhist concept of "the greater self." The daylong seminar, "Cultivating the Greater Self," featured four speakers: Ann Diller of the University of New Hampshire (UNH), Bernice Lerner of Hebrew College, Lou Marinoff of The City College of New York (CCNY), and Virginia Benson of the Ikeda Center. They examined the greater self from a variety of cultural and philosophical perspectives, with the emphasis on ways that education and dialogue can cultivate this enlightened state. The seminar's core definition of the greater self was drawn from a passage in Mr. Ikeda's 1993 Harvard University lecture, "Mahayana Buddhism and 21st Century Civilization": "The greater self . . . is another way of expressing the openness and expansiveness of character that embraces the suffering of all people as one's own. This self always seeks out ways of alleviating the pain, and augmenting the happiness, of others, here, amid the realities of everyday life."

Ms. Benson, who is Senior Research Fellow at the Ikeda Center, opened the program by profiling Mr. Ikeda's vision of the greater self, which he described in non-Buddhist terms as "natural human nobility" and "compassion that is empathetic but also action-oriented." In Choose Life, the dialogue he shared with Arnold Toynbee, moreover, Mr. Ikeda and the British historian associate Buddhist compassion with "the idea of universal love," although the former cautions it must not be relegated to abstract concept, but tangibly expressed with joy through openhearted, open-minded dialogue. The Buddhist thinker holds that dialogue--with its faith in the infinite potential of all people to possess and embody universal truth--is uniquely able, as Ms. Benson phrased it, "to bring out the greater self in all of us." 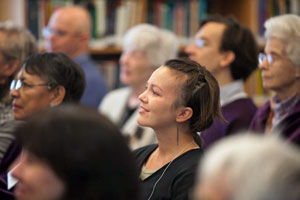 UNH education professor Diller identified the voice of the superego, a Freudian concept that shares many qualities with the Buddhist lesser self, as the primary obstacle to the inner exploration that facilitates the emergence of the greater self. The voice of the greater self, she said, is compassionate and inspires us to do better when we have fallen short of our ideals. The voice of the superego, on the other hand, is "condemning" and "mean-spirited" and encourages us to doubt ourselves. When faced with such doubt or discomfort, she added, people tend to become defensive, vacillating between reactive negativity and grandiose, egoistic expressions of self-worth.

Ms. Lerner, Hebrew College director of adult learning who also serves as senior scholar at Boston University's Center for Character and Social Responsibility, focused on the insights of psychiatrist Victor Frankl, a Holocaust survivor and renowned author of Man's Search for Meaning. Ms. Lerner discussed how the attitude a person adopts is the key factor in the search for meaning in life and in shaping his or her destiny. She suggested that an individual's attitudinal choices can ultimately be interpreted as the degree of responsibility that person is willing to exercise on behalf of our own well being and that of the world at-large.

Dr. Marinoff, professor and chair of CCNY's department of philosophy and founding president of the American Philosophical Practitioners Association, noted that the cultivation of the greater self "was a preoccupation of many sages, schools and traditions of antiquity," but the pursuit has waned over the centuries, particularly in the West. Developing a proper view of life's challenges, one free of "negative emotions and destructive passions," he continued, is an art, which "like all arts, requires practice." The American philosopher pointed out that many Westerners today "reify and inflate" the lesser self--which, through its misguided fixation on permanence, has led to rampant unhappiness--but that the greater self is unfettered by such fixations, allowing it to alleviate the suffering of others. In the end, the Buddhist principle of transforming poison into medicine, he explained, "is tantamount, if not equivalent, to cultivating the greater self."

The seminar also featured flutist Alyssa Griggs and guitarist Devin Ulibarri, who performed a set of duets from Mountain Songs by Robert Beaser. It also hosted three question and answer sessions in which speakers and attendees alike delved into such topics as the delusions of the finite self and coping with fear in a society threatened by the specter of terrorism.

The Annual Ikeda Forum for Intercultural Dialogue explores connections between life-affirming philosophies deriving from literary, cultural and educational traditions in the East and West. The Ikeda Center holds the annual series by inviting like-minded scholars and attendees to engage in openhearted dialogue, examining a range of perspectives in humanistic thought.

[Adapted from an October 2011 article by Mitch Bogen featured on the Ikeda Center for Peace, Learning, and Dialogue website and carried in the November 5, 2011, issue of the Seikyo Shimbun, Soka Gakkai, Japan]