Located in Jiangxi province in southeastern China, Jinggangshan University was established in 1958, but was forced to close for 44 years due to economic difficulties. It was formally rededicated in 2007 and has since seen its student enrollment grow to some 27,000 students, of which 17,000 are undergraduates. JU has a full-time faculty of 985 members who provide specialized instruction in 20 departments, ranging from medicine and commerce to the sciences and the arts, while operating a university medical center.

In his presentation address, President Zhang cited Mr. Ikeda for his pioneering efforts to normalize relations between China and Japan, as well as for his body of work as a peacebuilder, philosopher, educator, author and an internationally recognized humanitarian. In response to Mr. Ikeda's manifold contributions, the president said JU would soon be opening a center to collaborate with other scholars for research into Mr. Ikeda's philosophical vision and to introduce his vision to as broad an audience as possible.

In his acceptance speech, Mr. Ikeda thanked JU for the academic honor and, referring to the numerous challenges that the Chinese institution had to meet and overcome, said that the building of a university was truly "a life-or-death struggle." Every institute of higher learning, he said, not only provides students with the opportunity to improve their education, but also to hone their wisdom and forge their character.

He also underscored Japan's enduring debt to China for much of its cultural and spiritual heritage, including the introduction of Buddhism. Just as a university serves a beacon for individual and social betterment, he said Buddhism teaches that every person possesses an inner spark of wisdom, capable of transforming the entire breadth of human suffering into a source of immense creative energy and personal development.

Once lit, he explained, the "great light cast by this wisdom can banish the darkness emerging from the deepest depths of turmoil and uncertainty, leading all humanity towards happiness, peace and prosperity." 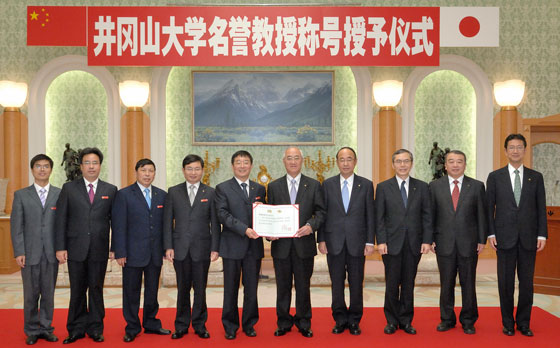 [Adapted from an article in the October 21, 2011, issue of the Seikyo Shimbun, Soka Gakkai, Japan]