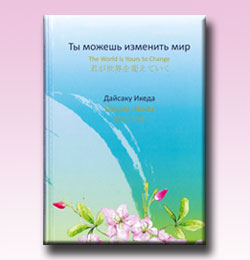 Russian edition of The World is Yours to Change

MOSCOW, Russia: Moscow State University (MSU) Press has published a Russian edition of The World is Yours to Change by Daisaku Ikeda. This edition includes English and Japanese translations with the Russian text. The World is Yours to Change is a collection of thematic essays in which Mr. Ikeda depicts attitudes and behaviors that will help pave the path to peace in the twenty-first century. In doing so, he draws on the lives of individuals, such as Mahatma Gandhi and Torao Kawasaki, whose strength of character and ability to persevere led to extraordinary achievements and the advancement of peace.

The essay collection was published to commemorate the author's first visit to the former Soviet Union on September 8, 1974. MSU Press Director Matveeva Alla Nikolaevna said the work, which he described as "a textbook" that imparts hope and courage to readers, should prove invaluable to young people.

The World is Yours to Change was originally released in Japan by Asahi Press in January 2002 as a bilingual edition with Japanese and English texts. It has since been published in India, Denmark, Korea and the United Arab Emirates.

[Adapted from an article in the September 16, 2011, issue of the Seikyo Shimbun, Soka Gakkai, Japan]