PNU presented the honorary degree in recognition of Mr. Ikeda's longstanding service in promoting culture and advancing peace worldwide, as well as his commitment to strengthening Korea-Japan relations. Given the tragic events of the past between the two countries, President Park said Mr. Ikeda has not only underscored an enduring debt of gratitude to Korea as Japan's cultural benefactor, he has worked to promote the proper understanding of history and the right of Koreans residing in Japan to participate in the political process.

Located in Pusan, South Korea's largest port, PNU was established in 1996, with the merger of two schools, the National Fisheries University of Busan and Busan National University of Technology. Today, the school ranks among the nation's five best national universities, with 1,400 faculty members and an enrollment of 28,000 students. A technology leader, PNU offers instruction on and conducts research into environmental studies, marine sciences, nanotechnology, energy, biotechnology and information sciences. It has also entered into exchange programs with over 120 institutes and universities around the world, including Laval University in Canada, Nankai University in China, and Soka University in Japan.

Expressing profound gratitude to PNU for the honorary doctorate, Mr. Ikeda also thanked South Korea in his message for dispatching emergency rescue teams to the Tohoku region, which was hit hardest by the March 11, 2011 temblor and tsunami.

He then turned to the purpose of higher learning by saying, "When a student succeeds in achieving his or her dreams, that signifies success for a university and for education in general." The task of an educator is to dedicate one's entire being to the process of nurturing in the life of every youth the greatest value. He said Tsunesaburo Makiguchi, the founder of value-creating pedagogy, never wavered from this task, a commitment that ultimately cost him his life when he dared to oppose the militarist regime of wartime Japan for its blatant disregard of human life. 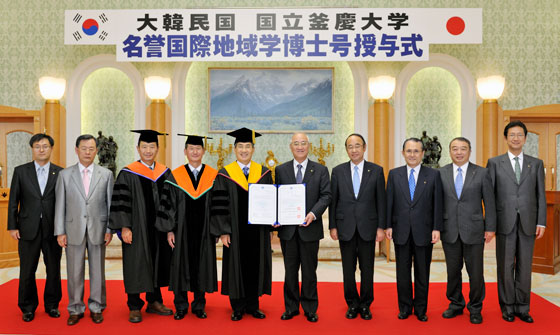 [Adapted from an article in the September 17, 2011, issue of the Seikyo Shimbun, Soka Gakkai, Japan]