On September 25, 2011, the University of Zambia presented Daisaku Ikeda, as founder of Soka University, with the degree of Honorary Doctor of Laws. The conferral ceremony took place by proxy at Soka University in Hachioji, Tokyo, with Vice-Chancellor Stephen Simukanga, Registrar Dr. A.N. Ng'andu and School of Law Dean Mulela Margaret Munalula representing the Zambian institution. Soka University Trustee Hiromasa Ikeda accepted the citation on behalf of his father. The occasion was a gathering of alumni from Soka University in Japan and the U.S., Soka Women's College and Soka Schools in Kansai and Tokyo.

In her citation address, Dean Munalula referred to a passage by Soka University President Hideo Yamamoto, who once noted that an academic honor was the highest accolade a university can accord an individual and that great insight and effort was invested into its conferral since the institution's very reputation was at stake. "We echo those sentiments," said the dean, "and it was therefore no easy matter for the University of Zambia, an institution which has awarded only a very small number of honorary doctorates in its lifespan of 45 years, to make this award."

She went on to explain, "The University of Zambia is honoring Dr. Ikeda with a degree in law because one of the core objectives of law is the achievement and enjoyment of human rights and peace by all . . . [He] is a man who has consciously and deliberately chosen to walk a path that places a premium on seeing every human being regardless of race, age, religion and gender achieve a happy life. Speaking as both an African and a woman I see myself as a direct beneficiary of efforts made by individuals and groups like Dr. Ikeda who are pursuing the realization of human rights."

Founded in 1966, the University of Zambia opened undergraduate schools of education, natural sciences and the humanities in 1967; six schools were later added, including law, medicine and engineering. Today, the prestigious national university has a student enrollment of some 12,000 and continues to serve as a dynamic force in Zambia's rapid economic development.

Dr. Kenneth D. Kaunda, the first president of the Republic of Zambia and original chancellor of the Zambian university, sent a message of felicitations for the occasion, which was read out to the audience by University Registrar Dr. A. N. Ng'andu.

In his message, Mr. Ikeda expressed joy and appreciation for the honorary doctorate and said he would like to accept the citation on behalf of the alumni of the Soka education system, "the men and women with whom I share indivisible spiritual bonds." He also praised the University of Zambia's commitment to higher education and its pursuit of learning as a service to society and nation, a goal first articulated by former President Kaunda.

While acknowledging that anguish and frustration are unavoidable facts of life, Mr. Ikeda noted that greatness could only be achieved by prevailing over immense adversity. "Yet, regardless of what may obstruct your advance, I urge you to tackle every challenge that stands before you with relish and tenacity," he said. "For it is only through adamantine effort that epic victory may be achieved, just as the mighty Zambezi River never ceases in its task to sustain the great savannas of Zambia so that life may flourish there." 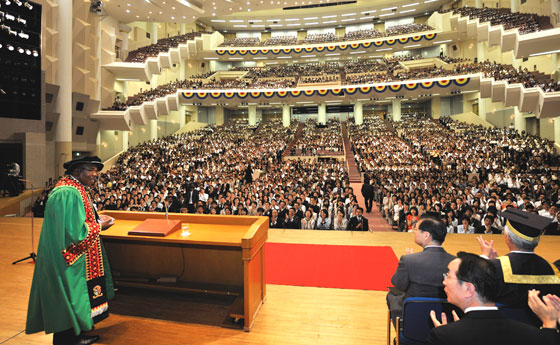 [Adapted from an article in the September 26, 2011, issue of the Seikyo Shimbun, Soka Gakkai, Japan]