On September 29, 2011, the Ikeda Center for Peace, Learning and Dialogue, located in Cambridge, Massachusetts, USA, hosted a seminar commemorating the 20th anniversary of Daisaku Ikeda's 1991 Harvard University lecture, "The Age of Soft Power." The two discussants featured in the seminar exploring the themes of Mr. Ikeda's address were Dr. Nur Yalman, professor of Social Anthropology and Middle Eastern Studies at Harvard, and Winston Langley, Provost and Vice Chancellor for Academic Affairs at the University of Massachusetts Boston. In the first part of the seminar, they shared insights on the themes of Mr. Ikeda's address; in the second, they exchanged ideas with university students.

Both scholars have in recent years engaged directly with Mr. Ikeda on matters of peace, education and cross-cultural understanding. Prof. Yalman collaborated on A Passage to Peace, a dialogue with Mr. Ikeda that was published in English in 2009. Dr. Langley was a member of a delegation from University of Massachusetts Boston that traveled to Tokyo to present Mr. Ikeda with an honorary doctoral degree in 2010.

Prof. Yalman and Dr. Langley agreed that Mr. Ikeda's vision of soft power was distinct from that of Harvard's Joseph Nye, who first explored the influential concept in his 1990 book, Bound to Lead: The Changing Nature of American Power. The professor was a respondent when Mr. Ikeda delivered his Harvard soft power address.

Dr. Langley explained that Prof. Nye, while urging greatly expanded reliance on soft power, holds hard power "as a contingency" given his past posting at the U.S. State Department. In contrast, Mr. Ikeda's objectives are educational and spiritual, aimed at "the transformation of individuals." Without this inner transformation, Dr. Langley continued, institutional efforts at peace building will never succeed.

Prof. Yalman said that Mr. Ikeda's conception of soft power is based on a desire to speak "directly to people's hearts" and called for activating globally the "inner resources of energy and wisdom existing within our lives" that Mr. Ikeda described in his address, the resources that constitute the primary tools of soft power, to meet the urgent challenges confronting humanity. Prevailing over these manifold issues will be difficult, but Prof. Yalman was optimistic. Said he: "We are at the beginning of a great adventure."

The scholars raised two other key points in their discussion, which addressed not only Mr. Ikeda's lecture but also his broader philosophical vision. Dr. Langley noted that Mr. Ikeda revives a form of humanism based on a "broad faith in human possibilities," a belief which provides a necessary foundation for interpersonal and intercultural dialogue. The other foundation for meaningful dialogue, said Prof. Yalman, is the human capacity for empathy that Mr. Ikeda has consistently championed.

The second half of the two-hour seminar was devoted to 14 Boston-area university students who were invited to exchange ideas directly with the two discussants. Among the questions that were posed was the challenge of promoting a philosophy of humanism at a rate to counter the conflicts sparked by the rapid advances in finance- and technology-driven globalization. While Dr. Langley agreed that technology enhances communication, he emphasized that it is our "moral consciousness" that ultimately determines whether or not technology will contribute to the betterment of humanity. 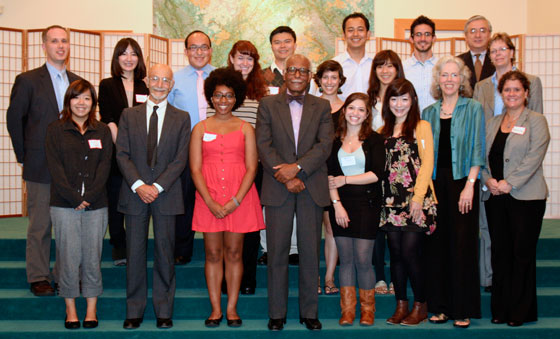 [Adapted from an October 2011 article by Mitch Bogen featured on the Ikeda Center for Peace, Learning and Dialogue website; also carried in the November 5, 2011, issue of the Seikyo Shimbun, Soka Gakkai, Japan]