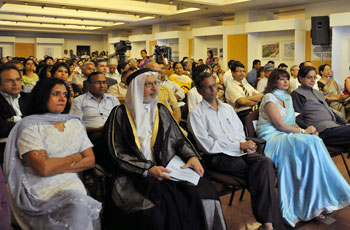 Seminar on Daisaku Ikeda's 2011 Peace Proposal, "Towards a World of Dignity for All," at the Indira Gandhi National Centre for Arts

On September 8, 2011, the Indira Gandhi National Centre for Arts (IGNCA) and Bharat Soka Gakkai, the Indian chapter of Soka Gakkai International, co-organized a seminar on Daisaku Ikeda's 2011 Peace Proposal, "Towards a World of Dignity for All: The Triumph of the Creative Life." The event was held at the Daisaku Ikeda Corner on Culture of Peace at IGNCA's Kalanidhi Reference Library in New Delhi and attended by over 400 people.

In his proposal, which he has issued annually since 1983, Mr. Ikeda urges the United Nations to reinforce collaborative ties with civil society in general and nongovernmental organizations in particular, while calling for the need to establish structures to reduce and ultimately abolish nuclear weapons. He also underscores the value of interfaith dialogue and the transformative capacity of young people to effect social reforms.

After a short film highlighting the central points of the 2011 peace proposal, Dr. R.C. Gaur, who heads IGNCA's Kalanida Division, delivered a welcome address. He said the library's launch of the Ikeda Corner in 2006 proved to be a major step in advancing culture and peace in Indian society and expressed pride in the Center's association with Bharat Soka Gakkai in the effort to promote pacifism.

In her address, Dr. Ananda discussed in detail the need to empower women and extend them equal rights and opportunities. The key to constructing a society of peace and harmony, she said, lay in people-to-people dialogue and the effort by both men and women to tackle modern challenges through reconciliation, love, compassion and sacrifice.

Mr. Mehta described the widespread unrest calling for democratic reforms in the Middle East as "the triumph of civil society" and agreed with Mr. Ikeda on the necessity of engaging youth. While Mr. Mehta sees interfaith dialogue as an equally crucial component in peacebuilding, he believes past efforts have been less than successful because they lacked a simple humane element. "We need to frame the rules for an interfaith dialogue and have the sincerity to see them through," he explained.

In his speech, Dr. Tharoor paid tribute to the SGI for promoting emotional and spiritual bonds among people. One of the most striking aspects of Mr. Ikeda's peace proposal that he discovered was the notion of genuine dialogue, which Dr. Tharoor understood as being an expression of human empathy transcending mere intellectual exchange.

"At the UN, I often found myself talking about the need for talking," he recalled. "I was struck by Dr. Ikeda's emphasis on interfaith dialogue. Very often, the problem is not with the faith, but with the faithful."

The seminar was also held in commemoration of second Soka Gakkai president Josei Toda's declaration for the global abolition of nuclear weapons, which he issued on September 8, 1957.

IGNCA was established in 1987 as an autonomous institution under the Ministry of Culture for the research and promotion of a broad array of subjects, from archaeology and anthropology to the visual and performing arts. The center includes a library and units engaged in lifestyle studies and technological applications for cultural preservation and propagation, as well as the study and publication of fundamental texts in Indian languages.

[Adapted from a report contributed by Bharat Soka Gakkai Director General Naveena Reddi and an article in the September 21, 2011, issue of the Seikyo Shimbun, Soka Gakkai, Japan]