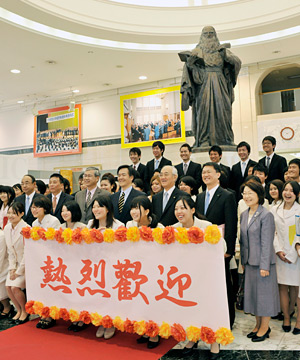 On April 11, 2012, Taipei College of Maritime Technology (TPMT), Taiwan, presented Daisaku Ikeda, Soka University founder and SGI president, with an honorary professorship. A ceremony was held by proxy at the Central Tower on the Soka University campus in Hachioji, Tokyo. Attending from TPMT were President Liu Tingyang, Liu Hsien-de, director of the Office of the Secretary, and Wang Te-sheng, director of the Finance Office.

Established in 1966 as a two-year college, TPMT was reorganized and elevated in status in 2007 with campuses in Taipei and New Taipei cities. Today some 5,300 students are enrolled in 12 departments, including marine affairs, international trade and business administration.

In the citation, President Liu stated that Mr. Ikeda was being recognized for his spirit of service and contributions to the advancement of peace, culture and education and expressed hopes for incorporating Mr. Ikeda's vision of building a new era through value-creation based on respect for the sanctity of life.

In a message, Mr. Ikeda expressed his profound appreciation for both the academic honor and support extended by the people of Taiwan to Japan in the aftermath of the earthquake and tsunami that devastated northeastern Japan one year ago. Mr. Ikeda referenced words of Sun Yat-Sen (1866-1925), considered the father of modern China, stating, when youth can harness and manifest the boundless potential inherent within their lives, human beings will be able to accomplish any and all difficult undertakings and open a path of hope into the future.

He also shared two excerpts from Nichiren's writings he cherished as a young man and which continue to hold deep meaning for him: "All rivers flow into the sea, but does the sea turn back their waters? . . . Were it not for the flowing rivers, there would be no sea." With these words, Mr. Ikeda encouraged young people to develop a strong and vibrant life condition grounded in a philosophy based on reverence for life, which will enable one to joyfully and courageously face all currents of hardship. Youth, he said, should never confine themselves to narrow-minded egoism but develop a heart as vast and magnanimous as the ocean and spread friendship and cooperation among the world's citizens.

[Adapted from an article in the April 12, 2012, issue of the Seikyo Shimbun, Soka Gakkai, Japan]