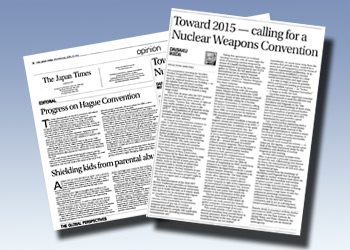 "Toward 2015--Calling for a Nuclear Weapons Convention," an essay by Daisaku Ikeda, was carried in the April 25, 2012, issue of The Japan Times, one of the nation's largest English language dailies.

Noting that "the proliferation of nuclear weapons has yet to cease" despite more than 40 years having passed since the Nonproliferation Treaty (NPT) went into effect in 1970, Mr. Ikeda cites regional tensions that have been building, from Iran’s nuclear development program in the Middle East to the North Korean attempt to launch a long-range rocket in Northeast Asia. In response to such challenges, Mr. Ikeda calls for support toward the realization of a Nuclear Weapons Convention to rid the world of nuclear arms and arsenals through such steps as "a nuclear weapons moratorium based on a clear overall forward vision and legal norm" at the earliest possible opportunity.

Mr. Ikeda also urges that a nuclear abolition summit be convened in Hiroshima and Nagasaki on the 70th anniversary of the atomic bombing of those cities with the participation of government heads and representatives of global civil society, working toward the release or signing of a "basic framework treaty for the prohibition and abolition of nuclear weapons at that meeting."