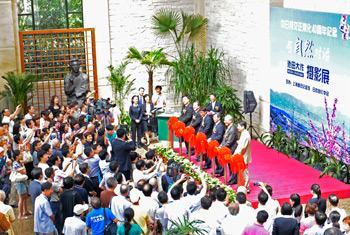 Ribbon-cutting for the exhibition opening

The Lu Xun Memorial Hall in Shanghai, China, was recently the venue for "Dialogue with Nature," an exhibition of nature and scenic photographs taken by Daisaku Ikeda in Japan and during his travels abroad. The opening for the exhibition, which commemorated the 40th anniversary of normalization of diplomatic relations between China and Japan and the 10th anniversary of Mr. Ikeda's appointment as an honorary advisor to the museum, took place on August 16, 2012, and was attended by 150 guests, mainly from art and academic circles, including Chu Xiaobo, executive vice president of the Shanghai Municipal Administration of Culture, Radio, Film and Television and assistant director of the Shanghai Municipal Administration of Cultural Heritage, and Wang Xiaoshu, executive vice president of Shanghai People's Association for Friendship with Foreign Countries.

Museum Director Wang Xirong introduced the exhibition, followed by greetings by Mr. Chu, who described Mr. Ikeda's photography as being imbued with his ideals, passion and unique philosophy of harmony between humans and nature, inspiring both personal introspection and the spirit of coexistence with nature. Mr. Chu also cited Mr. Ikeda for publicly calling for the normalization of diplomatic relations between China and Japan in 1968, when the two countries were technically still in a state of war, and for his ongoing promotion of bilateral goodwill and cultural exchange.

In a message read by proxy, Mr. Ikeda relayed his appreciation for the Lu Xun Memorial Hall sponsoring the exhibition of his works, and reaffirmed his commitment to Sino-Japanese friendship, no matter how precipitous the path. Noting that photography is the most accessible and popular art form, he equated it with poetry that is "read" with the eyes.

The Lu Xun Memorial Hall is a tribute to Lu Xun (1881-1936), a writer and revolutionary who employed the power of words to encourage and educate the ordinary citizens of China during a time of military posturing, political decay and cultural upheaval. Lu Xun's original manuscripts, diaries, original copies of magazines and journals that published his writings, and foreign-language translations of his works, are displayed.

"Dialogue with Nature" was shown until September 9, 2012.

[Adapted from an article in the August 18, 2012, issue of the Seikyo Shimbun, Soka Gakkai, Japan]