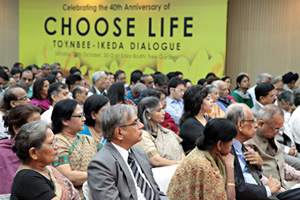 Bharat Soka Gakkai (BSG) organized a series of peace symposiums celebrating the 40th anniversary of the dialogue between SGI President Daisaku Ikeda and British historian Dr. Arnold J. Toynbee, which was subsequently published as Choose Life: A Dialogue. The events were held throughout India from October to December 2012.

Ms. Reddi introduced a passage from the preface to Choose Life in which Dr. Toynbee writes, "A human being's perennial spiritual task is to overcome his egotism by expanding his ego until it becomes coextensive with the ultimate reality, from which it is, in truth, inseparable . . . This spiritual exertion, made by individual human beings, is the only effective means of social change for the better."

Ms. Reddi stressed that, unless acted upon, even the ideal of the reverence for life can end up being a mere slogan without the power to transform reality. 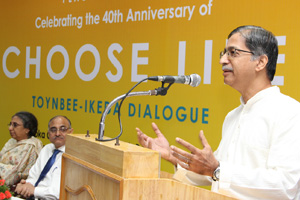 Dr. Devdas Menon, a speaker at the Choose Life symposium in Chennai

The third symposium, held on December 1 at the Indian Institute of Technology Madras (IIT Madras) in Chennai, attracted over 300 participants including students of IIT Madras and the neighboring Soka Ikeda College of Arts and Science, scholars, poets and BSG members. Panelists consisted of Dr. Devdas Menon, professor of structural engineering at IIT Madras; Prabha Sridevan, former judge of the Madras High Court; and B.S. Raghavan, author, former chief secretary of Tripura and policy advisor to the UN Food and Agriculture Organization (FAO).

An MBA student at IIT Madras commented, "Through this symposium, I learned that the purpose of education does not lie in material pursuits alone. Rather, education exists for the sake of creating value in society, amidst the people. And it is education with this purpose that directly connects to people's happiness."

To date, Choose Life has been translated into 28 languages including Hindi, Bengali, Urdu, French, Spanish, Chinese, Korean, Polish, Turkish, Swahili, Russian and Serbian. The book is based on conversations that took place between Daisaku Ikeda and Dr. Arnold J. Toynbee over 10 days in London in May 1972 and May 1973. This encounter informed Mr. Ikeda's commitment to dialogue as the strongest force for building lasting peace and inspired him to engage in over 1,600 subsequent dialogues with leading thinkers around the world.