Established in Beijing in 1949, CUFE is one of China's leading comprehensive universities. Some 15,000 students--including 300 international students--are enrolled in its 30 schools, departments and research centers, which provide advanced instruction in law, arts, sciences and engineering, with particular emphasis on economics and management. CUFE also offers continuing education and online education. A new 80-hectare campus is currently under construction in Shahe, Changping District.

This year marks the 40th anniversary of the normalization of diplomatic relations between China and Japan. Mr. Ikeda first proposed the restoration of ties in 1968 at a time when the two countries remained irreconcilable over Cold War differences and the Japanese occupation of Manchuria in World War II, exposing him to severe criticism in Japan. The CUFE academic honor is the 106th presented from Chinese institutions since 1984. 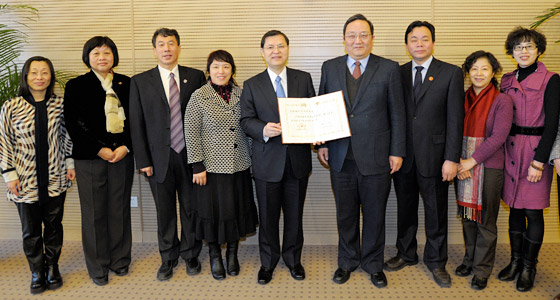 [Adapted from an article in the January 14, 2012, issue of the Seikyo Shimbun, Soka Gakkai, Japan]