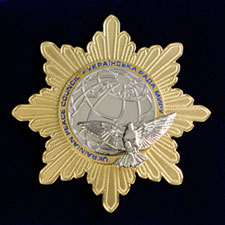 Order of Peace First Class of the Ukrainian Peace Council

On January 25, 2012, the Ukrainian Peace Council (UPC) presented Daisaku Ikeda with the Order of Peace First Class for his contributions to the advancement of the cause of justice, humanism, peace and harmony, as well as to the development of culture, science and education, in Ukraine and worldwide. The presentation ceremony took place at the Embassy of Ukraine in Tokyo, Japan, with Ukrainian Ambassador Mykola Kulinich and other embassy officials in attendance. Soka Gakkai President Minoru Harada accepted the medal on Mr. Ikeda's behalf.

Ambassador Kulinich told the Soka Gakkai delegation that conferring this award on SGI President Ikeda, who has worked in the service of peace, has great significance for Ukraine and Japan. This year marks the 20th anniversary since the establishment of diplomatic relations between the two countries. He also shared his belief that Mr. Ikeda's vision and values as a Buddhist humanist serve as positive guidelines for young people who shoulder responsibility for building a better future.

Founded in 1951, UPC draws its membership from social activists, legislators and cultural figures in the Ukraine and other countries. The council has been engaged in a broad range of activities to promote peace, environmental protection and charitable services. It was instrumental in launching the Dartmouth Conferences on peace, one of the longest ongoing unofficial bilateral dialogues between American and Soviet (now Russian) representatives, in the 1960s. In addition, it was among the first to inform the public on the Chernobyl nuclear disaster, framing initiatives taught in Ukrainian schools today on nuclear and environmental safety; it also established a children's educational exchange program.

In a message of appreciation read by President Harada, Mr. Ikeda thanked the UPC and Ukraine for the medal and reaffirmed his commitment to dialogue, as well as to fostering capable youth, for the sake of humanity's future. He also lauded Ukrainian initiatives to dismantle nuclear weapons stockpiled in the country.

Mr. Ikeda has long contributed to exchanges between Japan and Ukraine through the various institutes he has founded. Soka University in Tokyo and Kiev National University of Trade and Economics in Ukraine established a formal academic exchange agreement in 2003. The Min-On Concert Association (Min-On) sponsored a Japan tour by the Ukrainian State Folk Dance Ensemble in 2000 and 2003; and an exhibition of Mr. Ikeda's photographs, "Dialogue with Nature," was shown in the Ukrainian capital of Kiev in 2003 and 2007. Mr. Ikeda also coauthored a dialogue with Dr. Michael Z. Zgurovsky, rector at the National Technical University of Ukraine and former Ukrainian minister of education, published in Japanese and Russian in 2011. [Russian title: Japan and Ukraine--Their Respective Destinies, Their Shared Hopes.]

[Adapted from an article in the January 27, 2012, issue of the Seikyo Shimbun, Soka Gakkai, Japan]