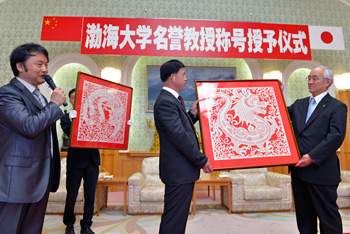 Mr. Ikeda was recognized for his longstanding contributions to Sino-Japanese friendship as well as to global peace.

Bohai University is located in the picturesque seaside city of Jinzhou, with the magnificent peaks of the Nan Shan Mountains serving as backdrop. With its roots beginning in 1950, the university has developed into a comprehensive institute of higher education. Over 100,000 students have graduated from Bohai University, contributing to society as experts in various fields such as education, scientific technology, business and trade. Presently, some 24,000 students matriculate in the university's 15 colleges, 6 departments and 4 research institutes, which offer 30 Master's degree and 49 Bachelor's and Associate degree programs. Bohai University engages in academic exchanges with universities and colleges in the UK, USA, Australia, Japan, South Korea, Canada and Russia.

President Yang said he and others at Bohai University have long admired Mr. Ikeda for his dedication to advancing bilateral relations between China and Japan and said his university was honored to present him with an honorary professorship. The philosophy of value-creation of Soka Education, he remarked, resonates with the educational creed of Bohai University: "Cultivate ingenuity, manifest individuality and spur development."

In a message, Mr. Ikeda expressed his appreciation for the honor, explaining that Jinzhou, home of Bonhai University, was redolent with youthful memories for him. His mentor, second Soka Gakkai President Josei Toda, had been captivated by Jinzhou for being a strategic and impregnable castle city in ancient China that protected all those within its walls; Jinzhou had often been a topic of conversation between them. Mr. Ikeda also lauded Professor Yang's advice to his students: it isn't necessarily the strongest or the most intelligent who survive, but those who have the ability to adapt to and take advantage of a rapidly changing environment. Soka Education teaches a similar lesson, Mr. Ikeda remarked. Students must utilize the knowledge they gain to develop the ability to create value through which to cultivate the means to winning in life with great resilience.

[Adapted from an article in the June 14, 2012, issue of the Seikyo Shimbun, Soka Gakkai, Japan]