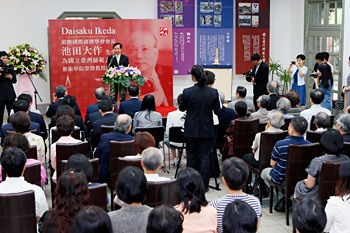 Mr. Ikeda was recognized for his longstanding promotion of cultural and educational exchange and contributions to global peace.

NTNU was originally founded in 1946 as an institute for teachers' education and later developed into a comprehensive university. More than half of Taiwan's teachers and principals of junior and senior high schools and around 17% of the country's university presidents are NTNU graduates. Its three campuses in Heping and in the Gongguan and Linkou districts of Taipei comprise ten colleges that include 59 departments and 54 graduate schools, offering courses and degrees ranging from the arts and humanities, education, sociology, business management, athletics, to the sciences. NTNU is also known for its language program, beginning with the Mandarin Training Center that draws more than 1,000 students from over 60 countries each year for Chinese Mandarin studies.

In 2001, the Taiwan Soka Association (TSA) established the Jingyang Arts and Culture Center in Douliu City for the purpose of promoting arts and culture. The center has exhibited the works of numerous local artists through the TSA initiative, the Soka Culture and Arts Exhibition Series; it has also collaborated with art institutes throughout Taiwan, including NTNU's College of Art, in organizing and hosting various exhibitions over the years. The center was recently recognized by Yulin County for its public service as an extramural education center.

In his conferral speech, President Chang said the philosophical ideals of Mr. Ikeda, who assigns great importance on culture, finds consonance with that of NTNU and the College of Arts. Both President Chang and Dean Lee referred to their university's partnership with TSA in promoting Taiwanese art, the most recent being a TSA exhibition exploring the cultural roots of 100 years of Taiwanese art.

In a message read by his son, Mr. Ikeda conveyed his deep appreciation for the academic honor, which he said he wished to share with the members of TSA who have striven to advance peace, culture and education in Taiwanese society over the past half-century. Mr. Ikeda also concurred with third NTNU president Dr. Liou Jen (1913- ), considered to be the "father of teacher education in Taiwan," who believed that the spirit of service was foundational to education and its practice.

[Adapted from an article in the June 7, 2012, issue of the Seikyo Shimbun, Soka Gakkai, Japan]