Originally founded in 1979 when Kyrgyz was a member-republic of the Soviet Union, BHU was reestablished in 1994 by resolution of the Kyrgyz Republic government. It engages in academic exchanges with overseas universities, inviting professors, lecturers and speakers on short and long-term teaching engagements from such countries as the USA, Germany, Japan, Korea and Turkey. The university's main departments are: Kyrgyz Philosophy, Russian Philology, German Philology, Oriental Studies and International Relations, and Public Administration and Sociology.

Calling Mr. Ikeda a humanist of the twentieth and twenty-first centuries, Rector Musaev commended him for promoting values that are both enduring and universal, and for building goodwill and cooperation through cultural exchange. He also described Mr. Ikeda's life of empathy and contribution serves as a model for others to emulate.

In a message prepared for the conferral, Mr. Ikeda expressed deep appreciation for the honor bestowed upon him. Noting that January 2012 marked the 20th anniversary of the establishment of diplomatic relations between Kyrgyz and Japan, he referred to the eleventh-century Kyrgyz poet Ballsagun and his entreaty to all people to engage in exchange and deepen friendships. He then spoke about his friend and renowned Kyrgyz writer Chingiz Aitmatov (1928-2008), who was a close advisor to former Soviet Union president Mikhail Gorbachev. Mr. Aitmatov, said Mr. Ikeda, emphasized that the humanities fosters global vision, foresight and a heartfelt respect for diverse cultures, philology and the arts. 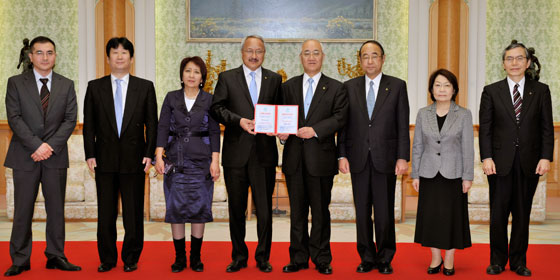 [Adapted from an article in the March 15, 2012, issue of the Seikyo Shimbun, Soka Gakkai, Japan]