On March 21, 2012, Bataan Peninsula State University (BPSU) in the Republic of the Philippines presented an Honorary Doctorate of Humanities to Daisaku Ikeda, Soka University founder and SGI president, in recognition of his contributions to peacebuilding, specifically the protection of human dignity and the advancement of education. During a ceremony at the Soka University Central Tower in Hachioji, Tokyo, BPSU President Delfin O. Magpantay entrusted the honorary doctorate of humanities degree and commemorative medal to Soka University President Hideo Yamamoto, who accepted them on Mr. Ikeda's behalf. Attending were: from BPSU--President Delfin O. Magpantay, Gregorio. J. Rodis, vice president for Research, Extension and Auxiliary Services, and Emmanuel Calvento Macaraeg, secretary of the University and of the Board of Regents; from University of the East--President Ester Albano-Garcia and Chancellor Zosimo M. Battad; and representative Soka University officials, faculty and students.

Since its inception in 1953, BPSU has fostered high-caliber leaders in fields related to business, engineering and technology, with a focus on information and computing technology. The school has grown steadily and in 2007 was registered as a state university with its main campus in Balanga City, and four auxiliary campuses in Bataan State.

"Sometimes our light goes out but is blown into flame by an encounter with another human being." Sharing this quote from Albert Schweitzer in his conferral speech, BPSU President Magpantay said these words reflect how Mr. Ikeda has inspired him to reawaken his passion for his own goals. He shared his belief that Mr. Ikeda's ideals would also serve as a guidepost and empower others in their journey of life. Calling Mr. Ikeda "a staunch crusader for peace throughout the world," he expressed his hopes that future generations would "draw strength and inspiration from the foundation he has laid, and . . . [work] for peace and human transformation."

In a message, Mr. Ikeda expressed his heartfelt appreciation for the honor, which he said he wished to dedicate to educator and first Soka Gakkai President Tsunesaburo Makiguchi and second Soka Gakkai President Josei Toda, both of whom had stood up against the Japanese militarist government and were incarcerated during World War II. He extolled the founder and namesake of Medina Lacson de Leon National School of Arts and Trades (precursor to the present Philippine university) who had organized an evacuation camp for wounded civilians following the Japanese Imperial Army invasion of her country during World War II. She escaped and personally rescued several men, women and children from the Bataan Death March in which some 75,000 American and Filipino prisoners of war were forcibly made to march over 100 kilometers with barely any water and no food for the first 3 days. An estimated 10,000 died. As a Buddhist, Mr. Ikeda said he continues to pray for the repose of the victims of the March and other Filipino citizens who lost their lives in the war. He then vowed that as a new member of Bataan Peninsula State University he would wholeheartedly dedicate himself to the advancement of education and youth exchanges that triumph over base, bestial tendencies leading to human tragedies. 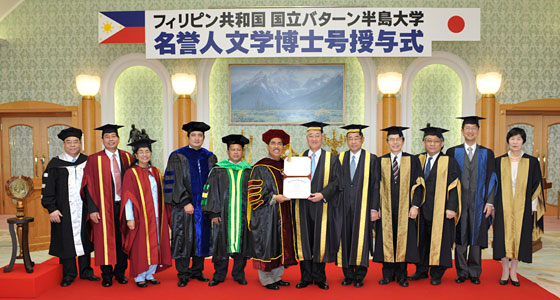 [Adapted from an article in the March 23, 2012, issue of the Seikyo Shimbun, Soka Gakkai, Japan]