On March 28, 2012, the Private Technical University of Santa Cruz (UTEPSA) presented SGI President Daisaku Ikeda with an honorary doctorate for his global contributions to peace and education based on humanistic ideals. The presentation took place by proxy on the Soka University campus in Hachioji, Tokyo. Rector Antonio Carvalho Suárez, Professor Juan M. Martínez and Bolivian Ambassador to Japan Luis Masaharu Higa Tomita and his wife were among those attending the ceremony.

Founded in 1994, the university is located in the city of Santa Cruz, Bolivia's largest city and economic and industrial center. With the motto, "To educate in favor of entrepreneurship and service," the university aims to foster capable leaders who embrace the ideals of global citizenship, a culture of peace and service to humanity. Some 10,000 students are enrolled under three main departments: business management, science technology, and socio-legal studies.

Rector Carvalho Suárez commended Mr. Ikeda for his ceaseless dedication to the promotion of a new humanism--the resurgence of humanity and an awareness of what it means to be truly human in a contemporary society that has fallen sway to egoistic dehumanization. Further, he said that Mr. Ikeda, through his lectures and writings brimming with wisdom, passion and common sense, awakens in people the desire to take concrete action for surmounting inequity and discrimination and restoring basic rights and dignity of all.

In a message, Mr. Ikeda commented that the university's founding spirit of "unity in diversity" finds consonance with the Buddhist concept of itai doshin, or "many in body, one in mind." Placing his hopes in the university's students as well as the youth of Bolivia, Mr. Ikeda affirmed that, in a global society polarized between two extremes of unification and division, there is a need to foster exceptional global citizens who will open the way toward an era of peaceful coexistence. 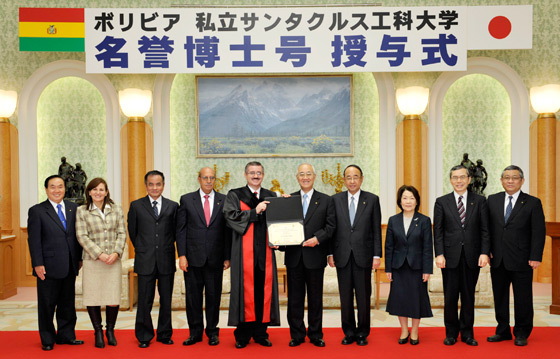 [Adapted from an article in the March 30, 2012, issue of the Seikyo Shimbun, Soka Gakkai, Japan]