The Technological University of Peru (Universidad Tecnologica del Peru-UTP) has presented Daisaku Ikeda, Soka University founder and SGI president, with an honorary doctorate. Mr. Ikeda was also given the title "professor emeritus" from the Faculty of Law, Political Science and International Relations. The honors recognize the SGI leader's promotion of world peace, equality and a spirit of social volunteerism among people. A ceremony took place by proxy on the Soka University campus in Hachioji, Tokyo, on May 6, 2012. UTP Founding President Roger Amuruz Gallegos entrusted the certificates and corresponding medals to Soka University President Hideo Yamamoto, who received them on Mr. Ikeda's behalf.

President Amuruz said UTP was honored to present Mr. Ikeda with the honorary doctorate and professorship, and hoped students would absorb Mr. Ikeda's ideals and learn from his rich life experience, spirituality and struggles for the sake of humanity's advancement.

In a message, Mr. Ikeda expressed his appreciation to the Peruvian people who supported Japan in the aftermath of the devastating earthquake and tsunami in March 2011 and even declared March 18, one week following the disaster, as a "National Day of Mourning." Noting that Peru was the first Latin American country to establish formal diplomatic relations with Japan in 1873, he said both countries have since deepened mutual friendship and have extended a helping hand to one another when struck by natural calamities.

Commending President Amuruz for establishing UTP with a passion for providing education to as many people as possible, Mr. Ikeda said this fundamental spirit is one Soka University proudly shares with the Peruvian institution. He also concurred with President Amuruz's belief that for the sake of a secure and bright future, students should live in the present, squarely challenging their problems, rather than being distracted by the past or future. He shared excerpts from a related Buddhist teaching, which states: "If you want to understand the causes that existed in the past, look at the results as they are manifested in the present. And if you want to understand what results will be manifested in the future, look at the causes that exist in the present." Mr. Ikeda said he hoped students would remember these words and tenaciously advance one step at a time, cheerfully and wisely living each day to the fullest. 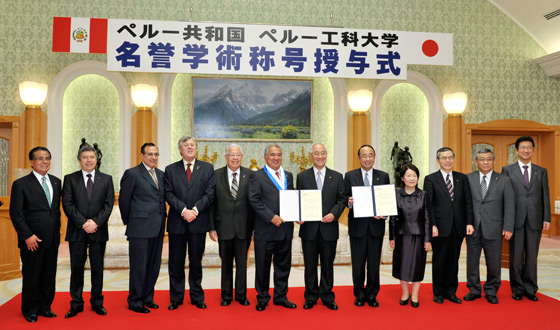 [Adapted from an article in the May 8, 2012, issue of the Seikyo Shimbun, Soka Gakkai, Japan]