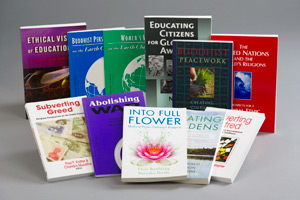 The number of universities in the world that have used or are currently using works developed by the Ikeda Center for Peace, Learning, and Dialogue has reached 300, the institute founded by Daisaku Ikeda in 1993 recently reported. The first two titles released by the Center's publishing arm, Dialogue Path Press, were Creating Waldens: An East-West Conversation on the American Renaissance (2009) and Into Full Flower: Making Peace Cultures Happen (2010)--dialogues coauthored by Mr. Ikeda.

The Center's books have also been used in more than 870 college and university courses in the United States, Germany, Indonesia, Canada and the Netherlands.

Since it was established nearly 20 years ago in Cambridge, Massachusetts, USA, the Center (previously known as the Boston Research Center for the 21st Century) has brought together "diverse scholars, activists and social innovators in search for the ideas and solutions that will assist in the peaceful evolution of humanity" with the aim of achieving "a fundamental shift in U.S. and international culture--from isolation, violence and war to interconnectedness, nonviolence and peace."

The Center also publishes books on education and key issues in global ethics, as well as holds an annual Ikeda Forum for Intercultural Dialogue begun in 2003.

[Adapted from an article in the May 13, 2012, issue of the Seikyo Shimbun, Soka Gakkai, Japan]