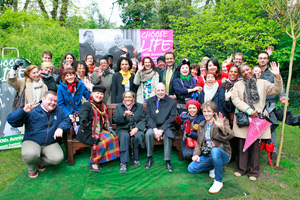 The conversations that took place over 10 days in London between British historian, Dr. Arnold Toynbee (1889-1975) and SGI President Daisaku Ikeda in May 1972 and May 1973 form the basis of the book Choose Life: A Dialogue, published in English. It is now available in 28 languages.

His discussions with Dr. Toynbee informed Mr. Ikeda's commitment to dialogue as a force strong enough to lead humanity from war and hatred to peace and coexistence. They also inspired Mr. Ikeda to engage in over 1,600 subsequent dialogues with various academics and scholars, including Linus Pauling and Mikhail Gorbachev.

To mark the 40th anniversary of the start of their dialogue, on May 5, 2012, a commemorative bench was unveiled in Holland Park, London, where Dr. Toynbee and Mr. Ikeda walked together during breaks in their discussions. The unveiling ceremony was attended by some 60 people including the Mayor of the Royal Borough of Kensington and Chelsea, Julie Mills, and SGI-UK General Director Robert Samuels. 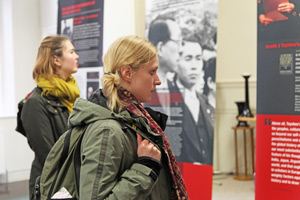 Representatives of SGI-UK's youth and student groups also created an exhibition titled "Choose Life--celebrating the power of dialogue" that was shown at the London Ikeda Peace Centre from May 14. The exhibition's opening ceremony was attended by Camden Mayor Abdul Quadir and SGI-UK leaders. Over five hundred people viewed the exhibition over the four days that it was open.

The exhibition promotes the power of genuine dialogue as a force for peace, emphasizing the continuing relevance of the insights offered in the Toynbee-Ikeda dialogue. It highlights some of the dialogue's key themes including the relationship between science and religion, and Buddhist concepts such as human revolution and the oneness of life and the environment. It also presents the significance of SGI's discussion meeting movement.

Screenings of two films were also held while the exhibition was on display. The first, Another Way of Seeing Things, discusses the dangers of stereotyping and prejudice and is based on an essay Mr. Ikeda wrote in response to the 9/11 terrorist attacks. The film also discusses Dr. Toynbee's reporting from Turkey during the Greco-Turkish War.

The second film recounts the meeting between Dr. Toynbee and Mr. Ikeda and subsequent dialogues Mr. Ikeda engaged in during the 1970s held with various leading academics and cultural figures in Europe.

In conjunction with the exhibition, two commemorative talks were given by SGI-UK members. The first talk, "Tragedy and the Limits of Reason: Toynbee's Search for the Middle Way," was given on May 15 by Dr. Paul Becque, a scholar specializing in human rights and international criminal justice. The second, "Choose Life--A Guide to Humanity's Future," was given by Willi Morrison on May 17.

[Adapted from articles from the May 16 and June 6, 2012, issues of the SGI-UK Online News Bulletin, an article from May 2012 issue of Art of Living, SGI-UK, and a report from SGI-UK; photos courtesy of Yoichi Masumoto and Deborah Ripley]