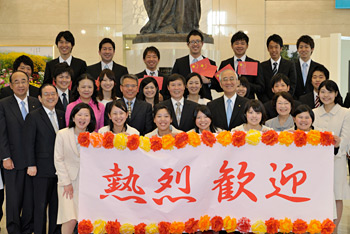 On May 8, 2012, Guizhou Normal University (GNU) of Guizhou, China, presented Daisaku Ikeda, as founder of Soka University, with an honorary professorship in recognition of his contributions to peace and human happiness through the advancement of culture and education, as well as his promotion of Sino-Japanese friendship. GNU President Wu Pengcheng led a delegation of university representatives to Japan to present the academic honor. At a ceremony by proxy held at the Soka University campus in Hachioji, Tokyo, Soka University President Hideo Yamamoto accepted the appointment certificate on Mr. Ikeda's behalf.

"In striving for world peace, settling differences in views and thinking is an extraordinarily difficult task," said President Wu. "That is precisely the reason why we place great importance on the kind of tolerance Mr. Ikeda exercises, for he is able to promote respect and harmony on a mutually consenting basis."

Established in Guizhou in 1941, GNU ranks among the province's most prestigious institutes of higher learning. Some 34,000 students--including 2,500 postgraduates--are enrolled in 19 departments on its three campuses staffed by 2,100 faculty and administration members. The university has also been recognized for its outreach initiatives in local communities, from a program to preserve and promote batik craftwork made by ethnic minorities to humanitarian assistance for impoverished farmers throughout Guizhou.

In an address delivered at the presentation ceremony, GNU President Wu cited Mr. Ikeda for his opposition to war and violence through his cultural and educational work, as well as his contributions to human rights education and advocacy of environmental protection and sustainable development. President Wu also commented that Mr. Ikeda's concept of "human revolution," or the inner transformation of human beings, is "key to breaking through the adversity of the modern era."

In an acceptance speech read by proxy by Soka University Board of Trustees Chair Yasunori Tashiro, Mr. Ikeda expressed his appreciation for the citation and praised the academic accomplishments of GNU and its service to the Guizhou community. He also spoke on the life and legacy of Xiao Wencan (1898-1963), a renowned mathematician and educator who strove tirelessly to protect and gradually shape GNU, established during the Sino-Japanese war, into the educational institution it has become today.

"Those who lead lives committed to the 'unseen virtue' of humanistic education . . . will enable young people to develop and society to flourish, earning the 'conspicuous benefit' of boundless gratitude of ordinary people," wrote Mr. Ikeda. "That 'unseen virtue leads to conspicuous benefit' is another lesson Japan has learned from the great philosophy of life of China."

[Adapted from an article in the May 9, 2012, issue of the Seikyo Shimbun, Soka Gakkai, Japan]