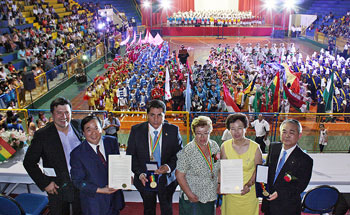 The lower house of the legislative assembly of the Plurinational State of Bolivia presented a special commendation to Daisaku Ikeda, SGI president, in recognition of his contributions to the inner development of the human being and education, grounded in the Buddhist philosophy of peace. Mrs. Kaneko Ikeda also received the same commendation for her role in promoting mutual understanding among the people of the world. Medals and award certificates were presented by proxy at a ceremony on November 17, 2012, following a culture festival commemorating the 50th anniversary of the founding of the first SGI chapter in Bolivia. Attending were: former Rector José Antonio de Chazal Palomo of the Private University of Santa Cruz de la Sierra; President Gonzalo Taboada López and former president Antonio Saavedra Muñoz of the National Academy of Sciences of Bolivia; and Bolivian lower house representatives Moisés Fanor Salces Lozano and Rosario Leonor Torrico de Arzabe.

SGI-Bolivia members have been building trust in their communities, holding various educational seminars and exhibitions including "From a Culture of Violence to a Culture of Peace: Transforming the Human Spirit" shown in 2000 and viewed by 110,000 people.

In a message, Mr. Ikeda commended SGI-Bolivia members for their dedicated efforts for the betterment of society over the past 50 years, emphasizing one-to-one dialogue as key to creating a solidarity among people toward lasting peace and happiness.

[Adapted from an article in the November 23, 2012, issue of the Seikyo Shimbun, Soka Gakkai, Japan]