The National Experimental University of Táchira in southern Venezuela conferred the degree of doctor, honoris causa, upon Daisaku Ikeda, Soka University founder and SGI president, for his dedication to the promotion of educational and cultural exchanges and his efforts toward securing world peace. The presentation by proxy took place in the central auditorium on the university campus in San Cristóbal City, Táchira State, on November 28, 2012, during a graduation ceremony. SGI Vice President Kunio Shima and SGI-Venezuela General Director Lydia Salas attended, together with Rector José Vicente Sánchez Frank and Secretary Óscar Alí Medina of the Venezuelan university.

Secretary Medina stated that the honorary doctorate, the university's highest honor, is presented to those individuals deemed to have contributed to the development of education, the sciences or culture in Venezuela or on a global scale and are recognized as exemplary role models for students of the university and citizens of Táchira.

Rector Sánchez referenced Argentine writer and poet Jorge Luis Borges (1889-1986), who believed the most important undertaking for an individual is to lead a righteous way of life and create happiness. He also affirmed that Mr. Ikeda perfectly matches that description as someone who has advanced along a correct path in life and has led others to happiness.

In his acceptance message read by proxy, Mr. Ikeda expressed his appreciation for the honor and commended the university for the values it upholds: responsibility, honesty, respect, liberty, justice, solidarity and ethics. He said Rector Sánchez embodies these values through his leadership and fostering of exceptional individuals who contribute to other's happiness and the flourishing of society. Introducing a verse from the university's song, Mr. Ikeda pledged to uphold its message of a desire to develop one's character and fellowship bound in shared ideals. 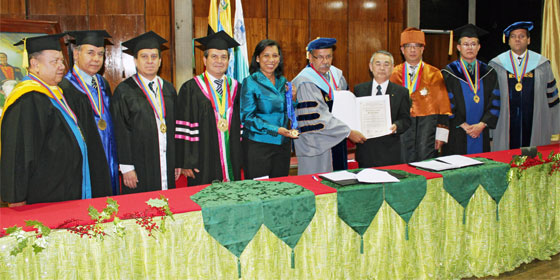 [Adapted from an article in the December 4, 2012, issue of the Seikyo Shimbun, Soka Gakkai, Japan]