Daisaku Ikeda, Min-On Concert Association founder and SGI president, was presented with medals and commendations from the Sakha Republic and Yakutsk City on October 10, 2012, in recognition of his longstanding contributions to peace and cultural exchange. The medals, together with citations signed by Sakha President Yegor Borisov, commemorated the 380th anniversary of the return of the Sakha Republic (Yakutia) to Russian rule and the establishment of Yakutsk as the Sakha capital in 1632. The conferral took place at the Min-On Culture Center in Shinjuku Ward, Tokyo. A delegation from the Sakha Republic, led by Deputy Prime Minister Feodosiya Gabysheva and Yakutsk Mayor Aisen Nikolayev, were on hand for the ceremony.

In her conferral address, Deputy Prime Minister Gabysheva praised Mr. Ikeda's efforts to promote goodwill and friendship between Sakha and Japan, particularly in the realms of culture and the performing arts and education, over the past two decades. She added that the accolades represent the Sakha Republic's hopes for furthering bilateral exchange and to learn from his philosophy of peace.

In October 1998, Mr. Ikeda met with then Sakha president Mikhail Yefimovich Nikolayev in Tokyo, and also met with Sakha Chair Vasily Vlasov in March 1999. As a result of these meetings, the North Star--a Sakha national folklore music and dance troupe--toured 23 cities in Japan at the invitation of the Min-On in 2001. In 2004, the republic's Arctic State Institute of Culture and Arts presented him with an honorary professorship, while a Sakha government delegation visited Soka University in Hachioji, Tokyo, to begin discussions on academic exchanges. In addition, "Dialogue with Nature," an exhibition of photographs taken by Mr. Ikeda, was shown in Yakutsk.

Encompassing over 3 million square kilometers, the Sakha Republic makes up around one fifth of the Russian Federation, yet its population stands at just some 1 million "Yakuts." Much of Sakha remains in a state of pristine natural condition, boasting a unique, rich and diverse biosphere in which roughly half of the republic lies within the Arctic Circle. Its climate fluctuates widely, with temperatures reaching 40 degrees Celcius in summer, when the sun barely sets, and dropping as low as minus 60 degrees Celcius in winter. Another distinct feature of Sakha is its abundance of lakes--there are, it is said, at least one for every inhabitant. 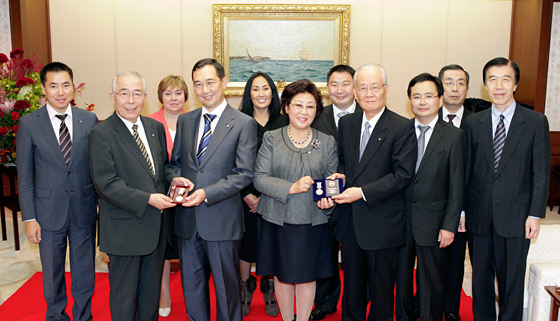 [Adapted from an article in the October 11, 2012, issue of the Seikyo Shimbun, Soka Gakkai, Japan]