A Dialogue on Interdependence at Ikeda Center's Ninth Annual Forum 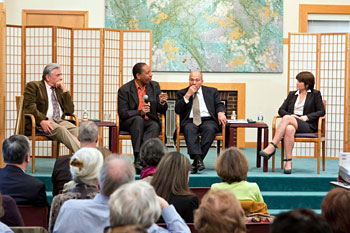 "To some extent," said Stephen Gould, "we are like the man who wishes to believe he was born in a log cabin that he built all by himself." Dr. Gould, who is director of the Educational Leadership Program at Lesley University, was one of five speakers at the Ninth Annual Ikeda Forum for Intercultural Dialogue, held at the Ikeda Center for Peace, Learning, and Dialogue in Cambridge, Massachusetts, USA, on October 13, 2012. His remark revealed how we fail to respect the truth of interdependence, the Buddhist concept that the day was dedicated to celebrating and exploring, under the theme "Awakening Our Connections: A Dialogue on Interdependence."

The event was moderated by Julia Upton, a special education teacher at Melmark New England, a school serving children with severe disabilities. In her opening remarks, she told the more than 100 Boston-area attendees that she is interested in the interconnected growth of student and teacher alike. "Not only are the students dependent on me to teach them…but I also have to rely on my students to grow as an educator and as a human being."

Speaking next, Dr. Gould grounded his talk in the science of ecology. "Biologists have found that almost everything is the result of symbiotic interdependencies and that life seeks symbiosis so that more life may flourish." He connected this idea with Daisaku Ikeda's observation that "all things are linked in an intricate web of causation and connection."

Dr. Gould argued that interdependence is also core to America's democratic experiment. For him, humanistic values such as kindness, compassion, interconnectedness, trust, and fairness are "foundational" for society, and not merely good but optional ideas. Therefore, education must be oriented toward these values, even as schools trend toward what he calls a "consumerist" model.

Tanya Henderson, who is Public Policy Director at Women's Action for New Directions (WAND), focused her presentation on the importance of global efforts to include women in all considerations of the cost of war as well as in post-conflict efforts to create sustainable peace. She insisted that sustainable peace could never be created without the significant participation of those closest to the fabric of everyday life.

Ceasar McDowell, who is Professor of the Practice of Community Development at M.I.T. and President of the Interaction Institute for Social Change, questioned the individualist myths that blind us to our interdependence. He discussed a number of ideas that have the power to disrupt the frameworks that deny or obscure the truth of interdependence. One of these is that when considering any collective course of action we should always think how we can "design for the margins"--to ensure that marginalized people are included in visions of social well being.

Ved Nanda, a dialogue partner of Daisaku Ikeda, acknowledged the enormity of challenges implied in such a discussion of interdependence. "All issues are global issues now," he remarked, adding that "interdependence has become the defining issue" of global society. Dr. Nanda, who is Professor of International Law at Sturm College of Law, University of Denver, proceeded to look at global interdependence through the lenses of international law and human rights, his main areas of expertise. Contending that no nation, no matter how strong, can succeed alone in the world today, he emphasized the need for effective international institutions and agreements. In this regard he reflected on the significance of the European Union, which had received the 2012 Nobel Peace Prize just one day before the Forum, and the International Criminal Court (ICC), which was only realized, after nearly 100 years of effort to create such a body, because of the determination of a coalition of some 700 to 800 civil society organizations. As we envision a path to a better, more just world, said Dr. Nanda, there simply is no substitute for the committed efforts of ordinary citizens.

During the concluding Q & A session with all the day's speakers, one attendee asked which characteristics or skills are best suited to bringing about progress in an interdependent world. In response, Tanya Henderson cited a quote from Daisaku Ikeda that inspires all her work, whether it be working with a poor woman in crisis or a State Department official: engaging in true dialogue for peace means "the desire to know another's heart and the courage to have your own heart be known."

Q&A session during the Ninth Annual Forum at Ikeda Center

[Adapted from a November 2012 article by Mitch Bogen featured on the Ikeda Center for Peace, Learning, and Dialogue website: www.ikedacenter.org]