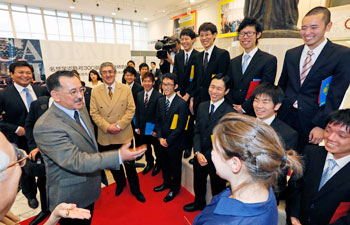 Kazakh National University of the Republic of Kazakhstan awarded an honorary professorship to Soka University founder Daisaku Ikeda in recognition of his contributions to education grounded in a philosophy of humanism. The conferral took place by proxy on the Soka University campus in Hachioji, Tokyo, on October 24, 2012, attended by Vice Rector Tlekkabul Ramazanov, Zhussupov Kairat Ziyavich, head of the Rector's Office, Zhansaya Dzh. Alibayeva, director of the International Exchange Office and Batyrkhan Kurmansei, minister-counselor of the Embassy of the Republic of Kazakhstan in Japan.

Located in central Asia, Kazakhstan is the world's ninth largest country and has a population of 16 million. In December 1991, it declared its independence from the Soviet Union; in 1998, the capital was moved from Almaty, Kazakhstan's largest city, to Astana. In days of old, the nomadic peoples of Kazakhstan traveled along the Silk Road, engaging in cultural exchanges between East and West.

[Al-Farabi] Kazakh National University was founded in 1934 and has an enrollment of over 20,000 students and a faculty population of 2,000. It serves as an important educational hub of central Asia. As is customary in Kazakhstan, the university, in the Kazakh language, is named after a historical figure, al-Farabi (c. 872-951), a renowned scientist, philosopher, cosmologist, logician, and musician of the Islamic Golden Age, thought to have been born in either Afghanistan or Kazakhstan, depending on the biographical source.

In his message of appreciation, Mr. Ikeda referred to a well-known Kazakh creed that says "If one has many friends, paths will unfold before you" and remarked that there was no greater joy than welcoming the university delegation who are "treasures of wisdom" of Kazakhstan, which shares a deep spiritual tradition and connection with other countries along the Silk Road.

[Adapted from an article in the October 25, 2012, issue of the Seikyo Shimbun, Soka Gakkai, Japan]