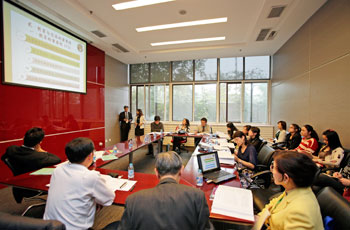 On October 27 and 28, 2012, the 7th International Academic Symposium on the Philosophy of Daisaku Ikeda, titled "Contemporary Education--A Blending of Diverse Cultures," took place at Shanghai Normal University (SHNU). The event, which commemorated the 40th anniversary of normalization of Sino-Japanese diplomatic relations and was cosponsored by the Chinese university and Soka University in Japan, drew some 100 scholars from 43 universities and academic institutions, including Tsinghua University, Nankai University and Sun Yat-sen University in China and the Ikeda Center for Peace, Learning, and Dialogue in the USA. Over 70 papers were presented during the two-day seminar.

SHNU Party Secretary Lu Jianfei commented that Mr. Ikeda's universal philosophy deeply resonates with that of Tao Xingzhi (1891-1946), a renowned 20th century Chinese educator and reformer, and is key to the blending of cultures. Education circles, he believed, would find resonance with the symposium theme.

Speaking at the opening on the 27th, SHNU President Zhang Minxuan emphasized that in international society, where globalization is advancing at a rapid pace, exchanges among civilizations is of prime importance. He expressed his hope that Chinese youth would learn from Mr. Ikeda who has contributed to advancing civilization based on a philosophy that embraces dialogue and harmonious coexistence.

In a message read in Chinese by Soka University Associate Professor Dong Fangsheng, Soka University founder Ikeda made three propositions in response to the symposium theme. First, that it is crucial for youth to learn from the diverse and august cultures of the world and believe in the profound reservoir of creativity that exists within their own lives. Second, that humanity should surmount differences and combine their wisdom to find answers to mounting global problems. Third, he hoped young people would continue to build an eternal golden bridge of friendship through the blending of diverse cultures.

In the afternoon, the participants grouped themselves into one of four themes--education, culture, peace and humanism--and then presented papers and held discussions on their chosen theme in workshops of some 40 scholars each. The workshops continued on the second day, together with an additional workshop held in English. Near the end of the day, the respective moderators shared workshop results. The symposium concluded with summary comments by Su Zhiliang, head of SHNU's Humanities and Communications College, and closing remarks by Soka University President Hideo Yamamoto and SHNU Party Secretary Lu.

On October 29, one of the participating Chinese institutions, Jinggangshan University, located in Jiangxi Province, China, officially opened the Daisaku Ikeda Research Center on its campus. The center aims to conduct research from various vantages on Mr. Ikeda''s peace, education and culture activities, together with his ideals and philosophy, and to advance Sino-Japanese friendship. University Vice President Zeng Jianping was installed as director of the center.

[Adapted from articles in the November 1 and 2, 2012, issues of the Seikyo Shimbun, Soka Gakkai, Japan]