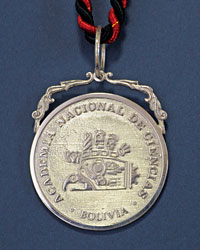 On October 6, 2012, the National Academy of Sciences of Bolivia inducted Soka University founder and SGI President Daisaku Ikeda as an Honorary Nonresident Member, recognizing his longstanding dedication to the cause of world peace. The presentation took place by proxy at Soka University in Hachioji, Tokyo, and was attended by Academy President Gonzalo Taboada López, former president Antonio Saavedra Muñoz, as well as Bolivian Ambassador to Japan Luis Masaharu Higa Tomita and his wife, Mrs. Carmen Marañon de Higa. The ceremony followed the annual Soka University and Soka Women's College festivals.

Founded by presidential decree in 1960 as a self-governing institute, the National Academy of Sciences of Bolivia supports and promotes research and development in science, technology and innovation. Its institutes include the Energy Institute, the Santa Ana Astronomical Observatory, the Museum of Natural History, the Biomedical Research Institute, the Beni Biological Station, and the Centre for the Promotion and Research of Science and Technology. It also acts as an advisory body to the government and the private sector. Among its members is former director-general of UNESCO Federico Mayor Zaragoza.

In a congratulatory speech, Professor Saavedra Muñoz explained that he first learned about the SGI when he was rector of the University of San Andrés, when the university hosted an exhibition introducing the SGI's peace activities. This, he said, led to his full support later, as the rector of the University of Aquino-Bolivia, of that university's conferral of an honorary doctorate upon Mr. Ikeda in 2009. On meeting Mr. Ikeda during the conferral ceremony, he was further impressed by his character and leadership. He believes Mr. Ikeda's philosophy and ideals are urgently required in this time of global divisions and conflict. Based on Mr. Ikeda's record of achievements and in order to advance and support his peace efforts, Professor Saavedra Muñoz nominated the SGI leader for an honorary nonresident membership of the Academy, with the unanimous approval of the board.

In his message read by proxy, Mr. Ikeda expressed his appreciation for the honor, saying that the Bolivian Academy has contributed to the betterment of people's daily lives and the development of society for the past half century. He shared words by prominent Bolivian poet and philosopher Franz Tamayo Solares (1878-1956), who believed the ultimate path lay in focusing on and developing life's capacity. Through upholding the fundamental sanctity of life, Mr. Ikeda asserted, people are able to create unity, transcending disparities and discord.

In closing, Mr. Ikeda called on the students of Soka University and Soka Women's College who were in attendance to manifest wisdom and courage from within their lives and adorn the springtime of their youth with victory.

[Adapted from an article in the October 7, 2012, issue of the Seikyo Shimbun, Soka Gakkai, Japan]