The University of Guelph (known as U of G) in Ontario, Canada, presented Daisaku Ikeda, Soka University founder and SGI president, with the degree of Doctor of Laws, honoris causa, in recognition of his "tireless commitment to achieving global peace and humanity through dialogue and education." A conferral ceremony was held by proxy at the Soka University campus in Hachioji, Tokyo, on September 12, 2012. It was attended by U of G President and Vice-Chancellor Alastair J. S. Summerlee, U of G-Humber Human Services Director Paul Sherman, and student representative Gavin Armstrong. Soka University President Hideo Yamamoto received the degree certificate on Mr. Ikeda's behalf.

U of G was founded in 1964 through the merger of the Ontario Veterinary College (opening in 1862 as the first college of its kind in Canada), Ontario Agricultural College (1874) and the Macdonald Institute (opening in 1903 as an institution for women). It currently offers over 94 undergraduate degrees, 48 graduate programs, and six associate degrees in many different disciplines. Among its more than 17,000 students are international students hailing from 100 countries and territories.

According to a recent survey, U of G ranks No. 1 in Canada both in the number of inventions per faculty and the number of inventions in proportion to research funding. Kevin Hall, vice president of research, explained, "We . . . want to put those discoveries to use in finding solutions to challenging issues . . . So moving research knowledge out of our classrooms and laboratories and putting it to use to benefit people's daily lives is our overarching goal."

Gavin Armstrong, who attended the conferral as a U of G representative student, is a Ph.D. candidate in biochemical science and a member of the Board of Governors of the university's The BetterPlanet Project. He was the recipient of the 2011 President William Jefferson Clinton Hunger Leadership Award as the first Canadian to receive the international honor, which is given to a university student for leadership and commitment to a life of service in hunger eradication, poverty reduction or a related area.

In the citation, Mr. Ikeda was commended for his extraordinary contributions "to helping people everywhere reach their potential, and to the belief that one individual can make a difference," and for being "an inspiration to young people around the world."

President Summerlee, explained that he finds consonance in Mr. Ikeda's expectations of youth's boundless potential and his dedication to creating a world of peace. He said U of G was honored to receive the SGI president among its ranks.

In an acceptance message, Mr. Ikeda expressed his deep appreciation for the accolade and expressed his profound respect for and concurrence with U of G's motto "Changing Lives, Improving Life." He commended the university's commitment to helping to positively transform the lives of others, marveling at learning that 70% of students spend over five hours per week on volunteer activities. He also lauded President Summerlee for serving as a role model such as through his volunteer activities in refugee camps in Kenya and for his research as an authority in the field of biomedical sciences and iron deficiency anemia leading to a breakthrough treatment that could improve the health of as many as two billion people in the world.

Mr. Ikeda stated that more than anyone else, the person he wished to report on his receiving an honorary doctorate from U of G was one of its alumni, the world-renowned economist John Kenneth Galbraith (1908-2006), with whom he had engaged in a dialogue published in Japan. The two had agreed on the need to develop "a continuous procession of capable people who not only possess the 'cool minds but warm hearts' [described by economist Alfred Marshall (1842-1924)], but a deep, abiding concern for all humankind as well" in order to brighten the future of global civilization. 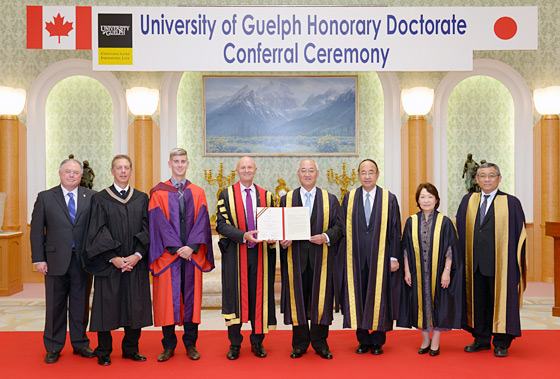 [Adapted from an article in the September 13, 2012, issue of the Seikyo Shimbun, Soka Gakkai, Japan]