Dom Bosco College of Higher Education (Dom Bosco College) in Cornélio Procópio, Paraná State, Brazil, presented an honorary doctorate to Daisaku Ikeda, Soka University founder and SGI president, at a conferral ceremony held by proxy on September 22, 2012. Mr. Ikeda was recognized for his pacifist ideals and activism. Dom Bosco President Dorival Almeida Ferreira, who had nominated Mr. Ikeda for the honor that was unanimously approved by the executive council, was on hand to entrust the degree certificate and robe to Mr. Ikeda's son, Hiromasa Ikeda, who accepted them on his father's behalf. The ceremony followed a reunion meeting of some 6,000 Soka University and Soka Women's College alumni, held at the main auditorium on the Hachioji, Tokyo, campus.

Dom Bosco President Almeida had first learned of the SGI leader and his humanistic philosophy and activities from a fellow council member when he was the president of the Sertaneja City Council in Paraná State. Later, he received a copy of Choose Life, a dialogue between Mr. Ikeda and the renowned British historian Arnold J. Toynbee (1889-1975), and found himself impressed by the authors' exploration of both profound and everyday life issues.

In 2004, Mr. Almeida cofounded Dom Bosco College with the aim of making education available for moderate tuition to financially disadvantaged students. The college's namesake, Italian Roman Catholic priest St. Giovanni Melchior Bosco, had dedicated his life to the betterment and education of disadvantaged youth and children. Today, Dom Bosco College has seven departments including economics, education and pharmacology, soon to be followed by a department of medicine, a correspondence school and a junior college.

In his conferral speech, President Almeida said it was a great honor and privilege to recognize Mr. Ikeda for his continuous contributions to peace, culture, education and the environment. He stated that Dom Bosco College has now accepted the task of promoting Dr. Ikeda's core belief--that one individual can transform the world and inspire people everywhere with hope, courage and passion.

In an acceptance speech read by proxy, Mr. Ikeda expressed his appreciation for the honorary doctorate from the Brazilian college, which he said he would like to share with the Soka alumni gathered for the ceremony. He commended President Almeida for dedicating his life to education and concurred with the college's four mottos--"Learning to Understand," "Learning to Create," "Learning to Coexist" and "Learning to Make the Most of One's Existence," noting that learning should be a lifetime aim of humanity. He affirmed that for youth wisdom is synonymous with strength, while harnessing one's potential and fulfilling one's unique purpose in life, regardless of the challenges one confronts, is critical.

In closing, he reminded the Soka alumni that they are "diamonds," which remain radiant under any circumstances; only diamonds, he explained earlier, can polish other diamonds. He then urged the men and women present to triumph over every difficulty and to continue leading contributive lives, true to the proud traditions of their alma mater, to the very end. 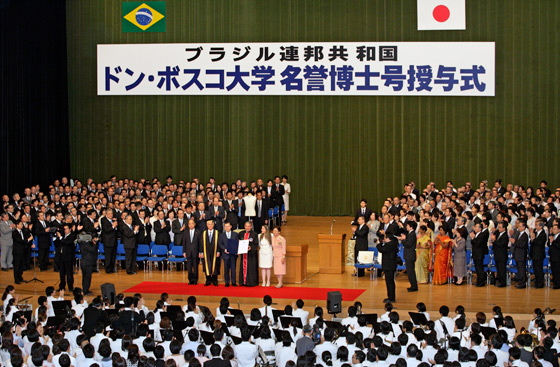 Conferral ceremony at the main auditorium on the Soka University campus in Hachioji, Tokyo

[Adapted from an article in the September 23, 2012, issue of the Seikyo Shimbun, Soka Gakkai, Japan]