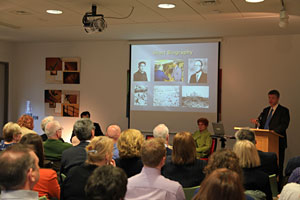 Toda Institute Director Urbain speaking at the peace seminar at the University of Ulster, Belfast

On April 10, 2013, Daisaku Ikeda contributed a message to a seminar on his philosophy of peace held at the University of Ulster in Belfast, Northern Ireland. Organized by the International Conflict Research Institute (INCORE) as a joint project of the university and the United Nations University, the seminar--"Inclusive Peacebuilding Locally and Globally"--was the second on Mr. Ikeda as peacebuilder and peacemaker following the first seminar held in 2012. It also commemorated the 15th anniversary of the Good Friday Agreement that finally brought peace to decades-long strife in Northern Ireland.

Dr. Olivier Urbain, director of the Toda Institute for Global Peace and Policy Research, a think tank founded by Mr. Ikeda in 1996, delivered the keynote address. The Toda institute director described the 1998 agreement as "historic, a triumph of dialogue when there was no hope for dialogue."

In his message, Mr. Ikeda recalled how his heart had "soared" when he heard the news that the agreement had been successfully signed and offered his prayers for the repose of all those who had lost their lives or loved ones in the conflict.

In the struggle to advance peace, Mr. Ikeda noted, every victory, no matter how modest, was vital and must be sustained. "I laud the tenacity and perseverance of the people [of Northern Ireland] who refused to give up hope and continued to push forward, one step at a time, toward the goals of reconciliation and peaceful coexistence." If humanity truly hopes to prevail over the perilous challenges of the twenty-first century, it must strive to sever the cycles of violence, terror and meaningless death. "This yearning, arising from the depths of the human heart," is foundational in building the solidarity that transcends racial, ethnic, religious or cultural divides, he wrote, and it "must be underpinned by the universal value of our commitment to the inherent dignity of life."

The cycles of violence and hatred, said the SGI president, may be broken when people empathize with the plight and pain of others, arriving at a common resolve that no one should have to endure similar suffering. He believed that the mothers of Belfast felt this way when the lives of three children were senselessly lost in a conflict-related accident in 1976, compelled into widespread protest by courage and a united sense of community. "This," Mr. Ikeda pointed out, "is the example set by the people of Northern Ireland."